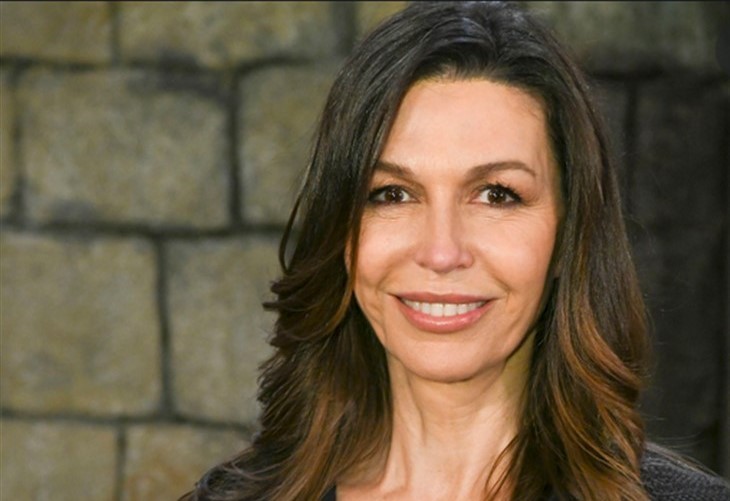 General Hospital (GH) spoilers and updates tease that Finola Hughes dropped some hints on whether her character, Anna Devane will get romantic with Valentin Cassadine (James Patrick Stuart).

On Tuesday, July 20, the actress dropped by Live with Kelly and Ryan, where she teased what’s to come for her character. Hughes seemed to be having fun catching up with Kelly Ripa, who was her former All My Children co-star.

During the interview, Hughes said, “well I can tell you that I’m sort of getting together with this guy who used to be also was in the agency and that we call it the Bureau which is the WSB.”

So it seems like Anna and Devane may get together. Fans know that the pair has been chasing a lead as they try to find Maxie Jones’ (Kirsten Storms) baby. Nothing’s been confirmed yet so fans just have to wait and see what happens next.

In the Tuesday, July 20 episode, fans saw Anna and Valentin approach David Hopkins (Robert Leeshock) at Ryan’s Bar in New York City. The pair gave him two options, talk to them or face charges for obstruction of justice.

David chose the latter and began telling them what he knew. He said there was someone else on the roof with Peter August (Wes Ramsey) and offered a description. He was a tall man wearing a blue or gray suit. He can’t say what his age was but he did recall that the guy had long hair, down to his collar.

After their brief talk, David was arrested by the cops for aiding and abetting a murderer. He was furious and said they had no proof for their allegations.

Meanwhile, Anna and Valentin were left to wonder who the mystery guy is. Valentin thinks the person was Peter’s ally but Anna thinks otherwise. She wondered why Peter had to hire someone to airlift him off the roof if he had someone who could help him. It’s only a matter of time before Anna figures out that Hamilton Finn (Michael Easton) had something to do with Peter’s disappearance.

During the week of July 26-30, Finn will finally admit to Anna that he was the man they’re looking for. He will admit that he was with Peter on the rooftop. Will he also come clean about his role in Peter’s death?