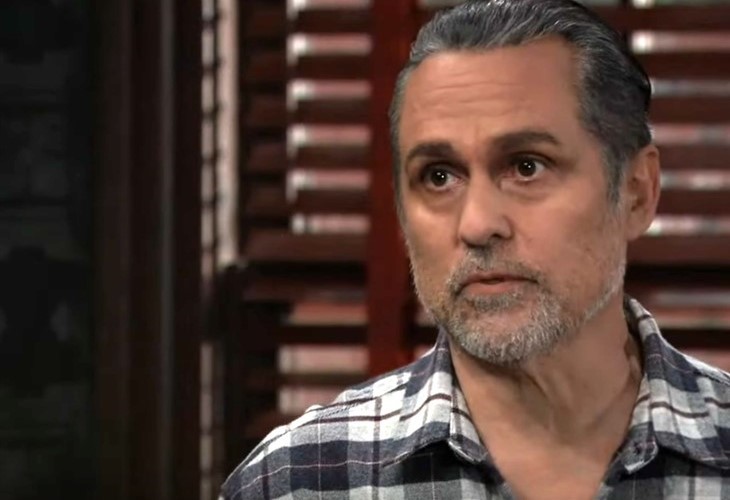 General Hospital spoilers and rumors tease that Sonny Corinthos (Maurice Benard) could regain his memory on his own – he’s been having flashes of memories recently, and that usually happens when an amnesiac begins to heal. Sonny had flashes of familiarity in recent General Hospital episodes when he was with Phyllis and Lenny Caulfield (Joyce Guy, Rif Hutton) in New York Methodist Hospital. What will he do when he realizes he’s in love with Nina Reeves (Cynthia Watros)?

General Hospital Spoilers And Rumors – A Near Miss

General Hospital viewers will recall from a few episodes back that there was a near miss between Sonny and Valentin Cassadine (James Patrick Stuart) and Anna Devane (Finola Hughes). As a matter of fact, many General Hospital fans noticed as they passed each other in a hallway of the hospital, that Valentin did a double take in Sonny’s direction. Later, he literally ran into Phyllis and they knew each other through Nina.

Sonny was in a closed examining room holding onto a hat like his father Mike Corbin (Max Gail) used to wear, as Anna talked to a nurse outside the closed door. Sonny seemed to recognize her voice, and she almost went into the room but then didn’t. Valentin and Anna could have solved that missing persons case quickly if one of them had seen Sonny, but all that happened were near misses!

In the meantime, the flashes of recognition and partial memory experiences that Sonny has been having recently may begin to be clearer – and he may also begin having more dreams of people and events in his past. Sonny’s seeming to have reminders if not total recall of the hat that looked like Mike’s, and the fact that he was getting these near memories in a hospital may indicate that being in the hospital and dealing with a dying Lenny may be triggering memories of Mike and his struggle with Alzheimer’s. General Hospital viewers know it’s not perfect; but it’s a start.

General Hospital viewers will also recall that when Sonny called Nina for help and told her they needed her, she was more than willing and ready. General Hospital viewers will remember that Nina took on Lenny’s hospital bills and will soon be back in Nixon Falls to lend emotional support to all of them. “Mike” aka Sonny has obviously been falling in love with Nina; and Nina has kept it all a secret partly because when she tried to tell Carly Corinthos (Laura Wright) Carly had been so ugly to her.

General Hospital Spoilers Thursday, July 22: Jordan Has a Letdown, Valentine Gets a Clue, Will Sasha Say Yes to the Wrench? #GH #GeneralHospitalhttps://t.co/aa5uh5W9rg

Nina also sees a much happier and relaxed Sonny when he doesn’t know he’s Sonny, and she loves him like that. It’s a totally different man than the sometimes violent mobster she knew in Port Charles! Nina is not planning on telling even him the truth about himself any time soon, but what might happen if he remembers everything on his own and then realizes he’s in love with Nina? One valid point that may be made is that things are different back home, and there is no way that Sonny would just be able to leave Nixon Falls and jump back into his old life! Carly will be soon married to Jason Morgan (Steve Burton) and everything is in Carly’s name and quite possibly will be in Jason’s also; Carly declared Sonny dead not very long after the search for him or his body was stopped.

Sonny may be relieved to know Cyrus Renault (Jeff Kober) is no longer a problem but now there’s a whole new problem; the Novaks! What will Sonny choose – jumping right back into a turf war in Port Charles, or live a much less complicated and much more peaceful life in Nixon Falls with Nina? Carly’s moved on as far as he’ll be concerned!