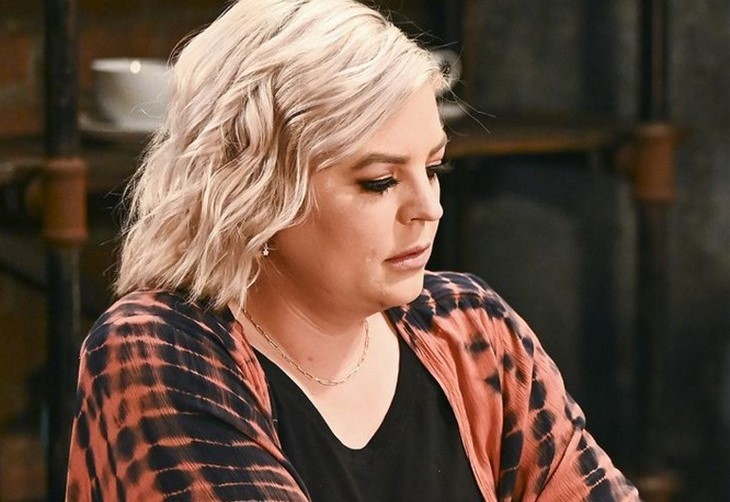 General Hospital spoilers indicate that Kirsten Storms will exit temporarily as Maxie Jones leaves town. Fans will remember that Kirsten had brain surgery in June and had to take a break to recover. Maxie, nor Kirsten’s absence has been given a time limit so far.

General Hospital Spoilers – Maxie Jones Needs To Get Away

General Hospital’s Maxie needs to get out of Port Charles because she cannot stay away from her daughter Louise August/Bailey Quartermaine (Harper and Scarlett Bloom). Maxie has placed her daughter with Brook Lynn Quartermaine (Amanda Setton) to protect her from Peter August (Wes Ramsey). Maxie has no idea that Peter is supposed to be dead thanks to Hamilton Finn (Michael Easton).

All Maxie knows is that Peter tried to steal her daughter and she cannot allow him access to her. Maxie also cannot allow anyone to figure out that Bailey is her daughter Louise. Maxie has realized that if she doesn’t get away, someone will figure out the truth so she has decided to take her other children and visit her family in Texas for a while. Maxie hopes that Peter has been caught by the time she returns.

GH Spoilers – Peter August’s Body Was In The Freezer

General Hospital’s Peter was placed in the hospital freeze weeks ago after Finn threw him down a flight of stairs. Finn and Liz Baldwin (Rebecca Herbst) were both convinced that Peter was dead. However, some rumors suggest that Peter’s body is gone and no one knows why. Could Finn and Liz have been wrong? Did Peter manage to release himself and go for help? Did one of Peter’s allies find him and get him to safety? Could someone have moved Peter’s body to blackmail Finn?

General Hospital Spoilers – How Does The Timeline Look So Far?

General Hospital’s Maxie will be off-screen for at least three weeks. However, it could be more than that. Maxie’s return depends on Kirsten’s recovery and no one wants her to rush back to work. Kirsten has just had a huge cyst removed from the lower part of her brain. Kirsten keeps fans up to date on her recovery through social media so fans will know when she is back at work. Of course, G.H. usually tapes at least a month ahead so chances are that Maxie won’t be seen for three weeks to a month after Kirsten’s return. Will Maxie come back and immediately claim her daughter? Will Maxie end up a suspect in Peter’s disappearance as well?

General Hospital (GH) Spoilers: Who Will Nikolas Get Into Trouble With The Most? @soapoperaspy https://t.co/USGkzsXIMz #GH #GeneralHospital

Fans are ready to see Maxie claim her child and get on with her life. How soon will Maxie be able to get her baby back? How will this reveal affect everyone involved with Louise and Bailey? Get well soon Kirsten, we hope to see Maxie soon.