The Bold And The Beautiful (B&B) Spoilers: Carter And Quinn Play With Fire And Could Get Burned 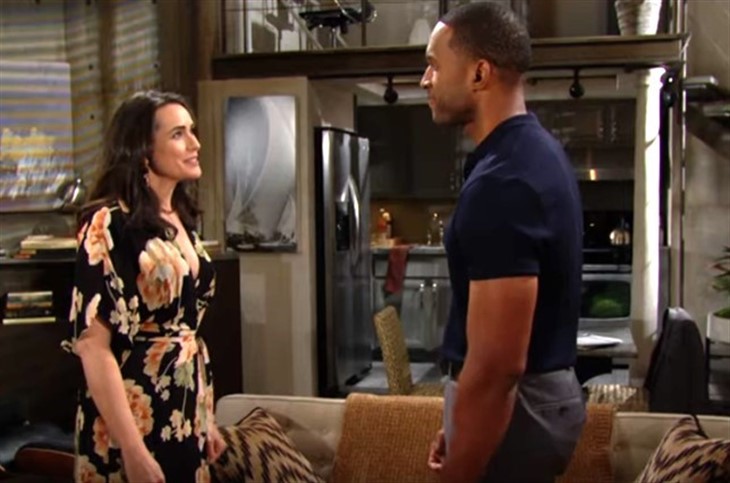 The Bold and the Beautiful (B&B) spoilers tease that Quarter are playing a dangerous game. Will Carter Walton (Lawrence Saint-Victor) and Quinn Forrester (Rena Sofer) be able to squelch the fire between them or is their lust already out of control?

These two have been given an ultimatum by Eric Forrester (John McCook) to cease and desist but explosive show spoilers reveal that they could get caught playing with fire.

Saint-Victor recently talked to Soap Opera Digest about this incendiary storyline saying, “They just feel safe with each other. No matter how much they try to deny each other … they just can’t stop.”

The Bold And The Beautiful (B&B) Spoilers: Diamond White Shares News Of Her New Gig

This sounds perilous for both characters as each is beholden to Eric Forrester for a good chunk of their livelihoods. Carter is the Forrester CEO and official lawyer and Quinn designs a jewelry line. Carter was able to salvage Quinn’s career when Eric was ready to torpedo it, but the fashion scion has no idea what these two are up to behind his back.

Carter will need some comfort when he learns that his intended, Zoe Buckingham (Kiara Barnes) is gone for good after learning of the Quarter affair. “Carter does still care about her, and he hates that he put her in a position to hurt her so Zoe staying in Paris hurts Carter—but it’s a strange dynamic.”

He goes on to say that conscientious Carter almost seems as if he wants to be punished. Now that he’s playing a dangerous game of intrigue, who will Carter chose to remain loyal to, his boss or his lover?

The Bold And The Beautiful Spoilers: Paris Intentions Questioned, Zende’s Concern And Uncertaintyhttps://t.co/7XehCEKNiB

The Bold And the Beautiful Spoilers – What Happens Next In LA?

As his portrayer notes, “Carter is a grown man,” and he had a career before he become top dawg at Forrester. If push comes to shove will he resent being told what to do by his boss? He has already betrayed Eric again by convincing him to keep Quinn’s jewelry line, something he boasted about to his beloved. Eric thinks he stood up for Quinn for financial reasons—what will Eric do when he learns that the truth is more complicated than that? Stay tuned B&B fans, August Sweeps is just around the corner!