The Bold And The Beautiful (B&B) Spoilers: Thomas Needs To Stop Ridge From Partnering with Justin 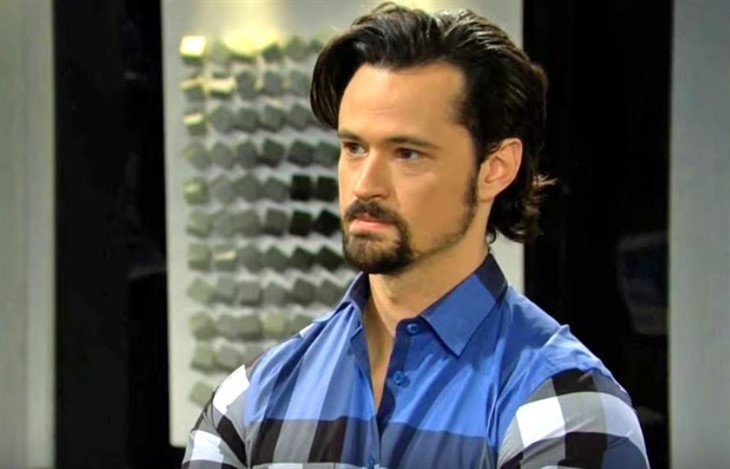 The Bold and the Beautiful (B&B) spoilers document that Thomas Forrester (Matthew Atkinson) has the ability to play the hero again. After demonstrating that he has turned an emotional corner during the Vincent Walker (Joe LoCicero) mystery reveal, Thomas can again demonstrate to everyone that he is redeeming himself.

Ridge Forrester (Thorsten Kaye) was given Bill Spencer’s (Don Diamont) infamous sword necklace. That symbol of the Dollar Bill persona and era was Justin Barber’s (Aaron Spears) gesture of loyalty to the Forrester’s.

As the fans noticed, Ridge didn’t reject Justin’s dangerous offer. He also didn’t accept it, leaving a Limbo-like space in the plot for all to speculate.

One would think that Ridge and Thomas would be in danger of being reported to the authorities if they agree to work with Justin. Couldn’t Bill, who would surely get wind of that shocking development, call his new friend, Deputy Chief Bradley Baker (Dan Martin), and inform him about Justin’s admitted actions or report his former best friend to California’s state legal board?

Even if the above doesn’t happen, Ridge can’t possibly believe that someone who would turn on a long-time friend and employer would be trustworthy. Yet, it seems that is exactly what Ridge is considering.

Thomas survived a terrible ordeal. Thankfully, Justin didn’t go totally berserk and commit a permanent act against Thomas while he was in that cage.

Atkinson’s character suffered no lasting physical injuries and retained his life. Now, he can’t allow the man who abducted him to prey on his father, who could be enticed by the thought of accessing deep dirt on his nemesis.

Thomas should tell Bill what’s happening and somehow force Ridge to get on board with that admission. It’s a risk, but one that is far less ominous than collaborating with Justin.

The Bold And The Beautiful (B&B) Spoilers: Paris And Zende Confront Each Other https://t.co/au2dGe6I5p

The Bold And The Beautiful Spoilers – Justin Barber Goes For Broke

Justin knows that he could be hauled into jail at almost any moment. Thomas, Ridge, or both could turn him in with solid cause.

So, Justin is going for broke. He is using the only leverage he has, meaning years of hard-earned damaging information about Bill.

If Ridge is smart, then he won’t take the bait. If Thomas’ redemption arc continues, then he’ll prove to be the man who saves his father from himself and protects Bill in the process.