The Bold And The Beautiful (B&B) Spoilers: Brooke and Katie Return to Sisterly Bond – But Can It Last? 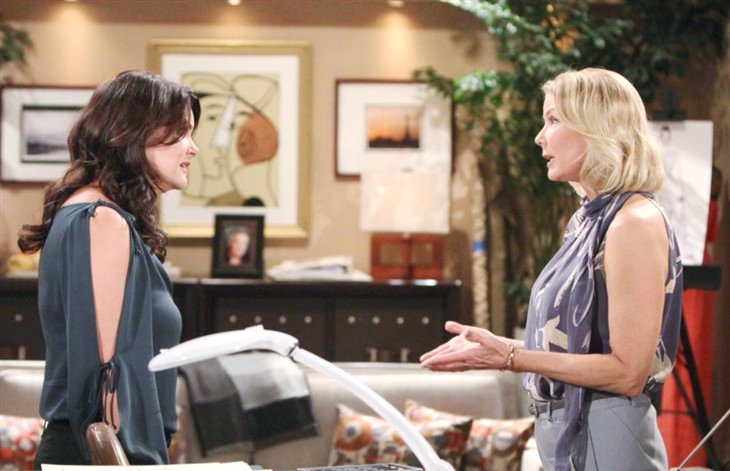 The Bold and the Beautiful (B&B) spoilers document that Brooke Logan Forrester (Katherine Kelly Lang) has reached a point in her life where it’s time to focus on herself. Yes, shrieks are heard from Brooke detractors across the globe when it is suggested that Lang’s iconic character ever thinks about anyone other than herself. But she does.

As for Katie Logan (Heather Tom), she has often been the poor soul. Equally as mentally sharp and vivacious as her sister, Katie has mostly been afflicted because of one person through the years.

Dollar Bill Spencer (Don Diamont) has often betrayed Katie’s trust. But he’s been released from wrongful imprisonment and is determined to be a better man and hopefully her once again husband.

Yes, it’s generous to say that Brooke has a colorful past. But it’s also fair to assert that she is a good mother to her children and is protective of the people she loves.

As for Forrester Creations, Brooke believes she deserves an expanded role. That could be her next push, with Ridge Forrester (Thorsten Kaye) being caught between his daughter, who is his co-Chief Executive Officer, and wife.

Katie loves Bill completely. While he’s been involved with Brooke various times, some of which caused Katie’s heart to shatter, Bill only has eyes for Katie now.

Should Tom’s character allow Bill to be a regular part of her romantic life again? That’s a hard question to answer, based on Bill’s history.

However Bill has clearly been impacted by what happened and Justin Barber’s (Aaron Spears) incredible betrayal. So, Bill would benefit by having Katie’s positive, caring influence in his life on a regular basis once again. Brooke might also be able to tip Bill off, via Katie, to Justin’s proposed alliance with Ridge.

The Bold And The Beautiful Spoilers: Zoe Passes The Torch On To Parishttps://t.co/xojzgcGu5L

The Bold And The Beautiful Spoilers – Sisterly Bond Can Prove Beneficial

Katie can help her sister realize that seeking power at Forrester Creations could easily cause a rift to reopen with Ridge. Putting him in the position of choosing between Brooke and Steffy wouldn’t be wise, as Katie will likely recognize.

Brooke can advise Katie to see Bill’s good side and at least consider giving him another chance. Brooke is fond of Bill and was his wife. So, this line of suggestion remains risky on B&B, but is well-intended.