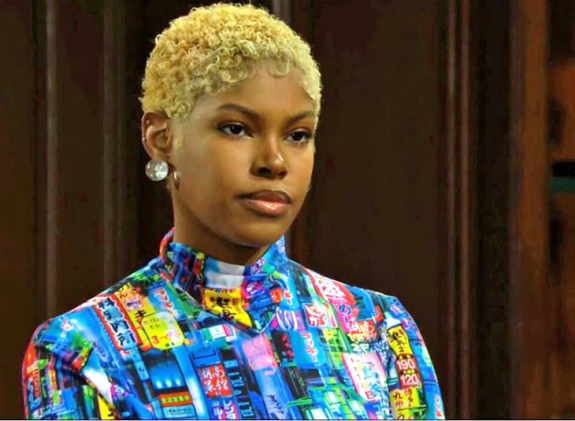 The Bold and the Beautiful (B&B) spoilers document that Paris Buckingham’s (Diamond White) developing feelings for John Finn Finnegan (Tanner Novlan) cause her to make an unexpected decision. She plans to move out of the cliff house.

The above implies that the potential for romance to develop between Paris and Finn is stunted. That likely is true, if she leaves soon.

Viewers often enjoy that magnificent overhead view of the cliff house during the visual bumpers that introduce scenes at that setting. Paris could not believe her good fortune when Steffy made the offer to live with Sinn at the cliff house.

That happened after Zoe Buckingham (Kiara Barnes) left town in a rush, following her messing up Zarter and alienating Zende Forrester Dominguez (Delon de Metz). Paris appeared to be a contrast to her sister, as she came across as sweet and loving.

Well, Paris did not anticipate falling for Finn. But she has. To avoid putting herself in a Zoe-like corner, Paris feels the need to avoid temptation, potential embarrassment, and the likely loss of her career at Forrester Creations in case she can not control her feelings for Finn from deepening.

Assuming that Sheila is Finn’s biological mother, then the threat to Steffy will persist. It is fair to insert that implied question in the last sentence.

The residents of this fictional version of Los Angeles, California, and B&B viewers never know if Sheila is being truthful or if so, how it might be bent to her advantage. So, Steffy will remain Sheila’s target until she somehow gains access to Finn and Hayes Forrester Finnegan (Samantha Worden and Piper Harriet).

With the above being true, Steffy will be distracted. She will also be on edge, which means further confrontations with Finn could happen during any particular episode.

The Bold And The Beautiful Spoilers – John Finn Finnegan Has Mother’s Personality In Him?

Steffy was chilled by the thought that Sheila’s DNA is part of her newborn son. That her blood is coursing through Finn’s veins is equally jarring.

But Finn is so sweet and loving, like Paris. So, Steffy must think that Finn is and will remain loyal.

Viewers saw a glimpse of Finn’s darker side when he defended Sinn against Liam Spencer (Scott Clifton). So, he has the potential to fight and potentially turn.

Finn’s tie to Sheila is family. That revealed plot point makes this storyline and Finn’s future actions unpredictable on B&B.