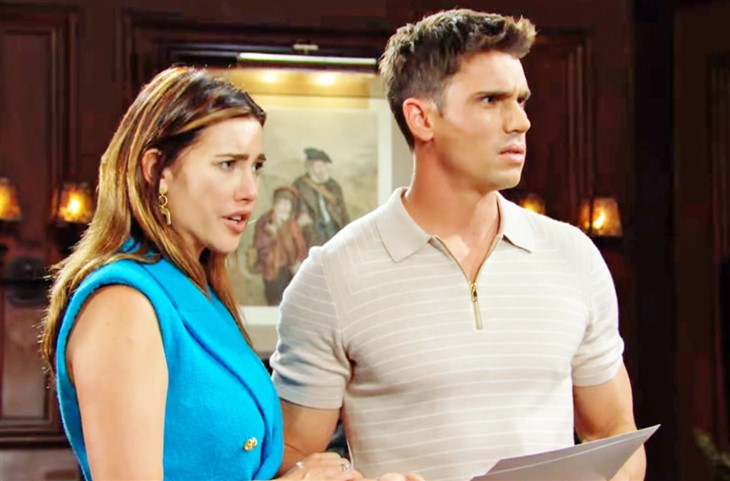 The Bold and the Beautiful spoilers document that Steffy Forrester Finnegan (Jacqueline MacInnes Wood) is overwhelmed. She realized a most unexpected dream by learning that her beloved husband did not die in the alley behind Il Giardino.

But Li Finnegan’s (Naomi Matsuda) efforts were not selfless because she chose to keep John Finn Finnegan’s (Tanner Novlan) survival a secret. However, that decision was made under extreme duress, as opposed to most acts that Sheila Carter (Kimberlin Brown) has ever willfully committed in her soapy life.

The Bold And The Beautiful Spoilers – Sheila Carter Is At-Large

Deacon worked hard to become a responsible guy. So, it did not fit this character’s trajectory to have him irresponsibly leave Sheila alone and not report her to the authorities.

Li resented that the Forrester family served as the link to her adoptive son to Sheila. That assessment was not logical but reflected Li’s desperate attempt to preserve and protect her son following the shooting.

Finn knew he had to get to Steffy. He tried to make contact through her cell phone during the trip to Monaco with Bill Spencer (Don Diamont) on the jet, but Steffy was not connected to reality at that point in the plot.

The wonderful reunion scenes hit every mark that daytime fans enjoy. Finn being back with Steffy is purely step one. As the return to Los Angeles, California, likely means another encounter with Sheila.

Being a fugitive and convinced that Steffy caused the rift with Finn, Sheila appears more dangerous than ever.

The Bold And The Beautiful Spoilers – Li Finnegan Pressed For Explanation

Li is getting better. She, like Sheila’s other victims, needs some time to recover from the car crash and lived on the wharf for a relatively short period.

Steffy asked Finn for details about what happened after they were shot. He tells her, which leads Steffy to press Li for an explanation.

Some sparks will fly. But both ladies care for Finn and will realize that Sheila is their enemy rather than each other.

It appears that the Finnegan family, hopefully also including Jack Finnegan (Ted King), will need to be united to fend off Sheila’s next attack on B&B.