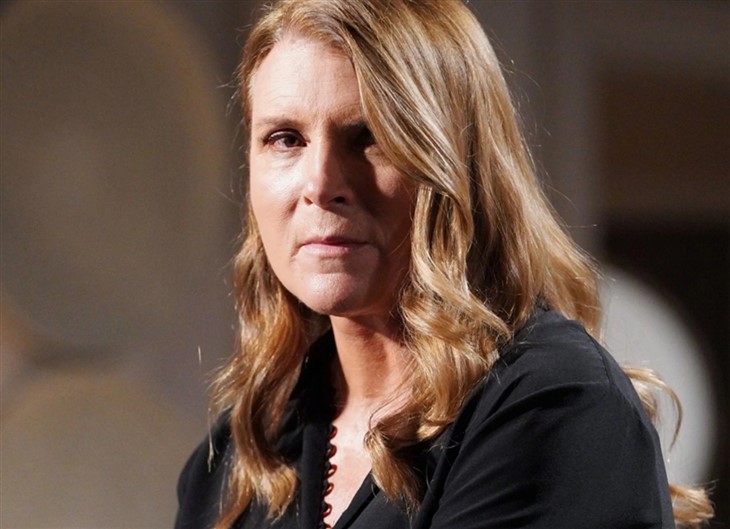 The Bold and the Beautiful (B&B) spoilers and updates tease Sheila Carter (Kimberlin Brown) is afraid that she is going to lose the love that’s she has found. Sheila has gotten into a relationship with Deacon Sharpe (Sean Kanan). Sheila knows that Deacon still has feelings for his past love Brooke Logan Forrester (Katherine Kelly Lang). Sheila and Deacon have found out that Brooke’s husband Ridge Forrester (Thorsten Kaye) has left her for Dr. Taylor Hayes (Krista Allen). Sheila is worried that Deacon will want to find a way to get Brooke back. Sheila will want to find a way to keep Deacon from reuniting with Brooke.

Shelia has been surprised that she has connected with Deacon. Sheila had wanted to be a part of her son Dr. John Finnegan’s (Tanner Novlan) life. Sheila knew that Finn’s wife Steffy Forrester (Jacqueline MacInnes Wood) did not want Finn to be around her. Sheila and Steffy had a violent altercation which ended with Sheila nearly killing Finn and Steffy. Sheila decided that she needed to fake her death because she was being pursued by the authorities. Sheila needed a place to stay and turned to Deacon. Sheila was grateful that Deacon decided to let her stay with him. Sheila has been happy that she and Deacon have become lovers.

The Bold And The Beautiful Spoilers: Carter And Katie’s Quick Pairing Debatable – Quinn’s Flight Out Of Town Unsurprising

Sheila will be determined to keep Deacon from Brooke. Sheila does not like Brooke. Sheila and Brooke have a troubled and complicated past. Sheila was upset that Brooke wanted to keep her from being a part of Finn’s life. Sheila decided that she would sabotage Brooke’s sobriety to keep her from interfering with her efforts to find a way to get to know Finn. Brooke ended up drinking on New Year’s Eve. Brooke had been alone on New Year’s Eve because Ridge was on a business trip.

Brooke invited Deacon to stay with her and she kissed him. Deacon had hoped that he would be able to get Brooke to want to leave Ridge for him. Deacon and Brooke have a tumultuous romantic past. Brooke and Deacon share their love for their daughter Hope Spencer (Annika Noelle). Sheila knows that Deacon has wanted to find a way to have Brooke and Hope in his life. Sheila is worried that Deacon may decide that he could have a chance to make a family with Brooke and Hope.

The Bold and the Beautiful Sheila wants to hold onto her relationship with Deacon. Sheila has resorted to underhanded tactics to get what she wants. Sheila may believe that she needs to go after Brooke to keep her away from Deacon. Will Sheila decide that she needs to find a way to get rid of Brooke to keep Deacon? Sheila may need to find a way to handle Brooke in a subtle fashion.