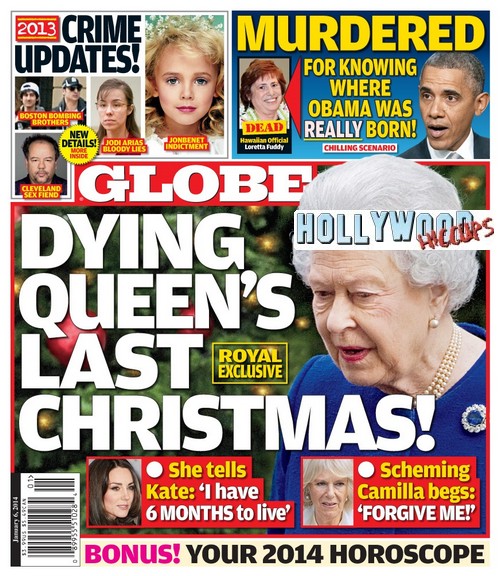 The current issue of Globe Magazine features the cover story, “Dying Queen’s Last Christmas.”  The magazine claims that Queen Elizabeth has revealed to her grandson Prince William‘s wife Kate Middleton that she only has, “6 months to live.”

When her son Prince Charles‘ wife Camilla Parker-Bowles found out the news she flipped out.  Camilla is a schemer and she is trying to get into the Queen’s good books and is begging her to, “forgive her.”  Fat chance of that ….  The Queen might be old but she is as sharp as a tack and she knows Camilla is a horrible person and a drunk and the people of England don’t like her.

Camilla is desperate to be Queen and she is ready to do anything to make it happen.  Too bad for her she has a snowball’s chance in hell of becoming Queen.  Queen Elizabeth is not crazy and she knows the Monarchy’s best chance of survival is to have Prince William and Kate Middleton become King and Queen.

What say you Hiccupers, do you think Camilla should become Queen?  Does she have a chance of conning the Queen?  Thoughts?