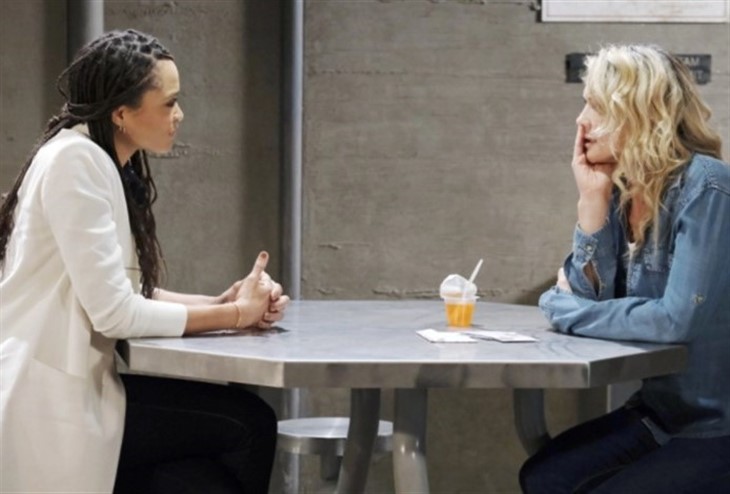 Days of Our Lives (DOOL) spoilers suggest that in Salem Lani Grant (Sal Stowers) knows there is something weird going on with Kristen Dimera (Stacy Haiduk). However, the gig could very well be up if Lani runs into Susan Banks (Stacy Haiduk). Susan is acting very possessive over Brady Black (Erik Martsolf) which could get Lani’s mind reeling. Will Lani be the one who discovers the switch?

Days of Our Lives Lani noticed that Kristen was acting very strange. However, Lani didn’t catch the changing voice or Susan’s teeth slipping when she thought she was with Kristen. Once Lani gets home and has time to think she may start to see the things that didn’t make sense. After all, it was very obvious that Lani wasn’t talking to Kristen. If Lani had checked Kristen’s visitor’s log, she would have easily known that Kristen wasn’t who she was speaking to. Susan and Kristen may look alike but Susan’s mannerisms were showing through.

Days of Our Lives Susan isn’t acting like herself either. Susan is outrageously possessive of Brady leading him to demand an explanation. Kristen pulled off covering her mistake by pretending to be concerned about Marlena Evans (Deidre Hall) and John Black (Drake Hogestyn). However, “Susan’s” hostility toward Chloe Lane (Nadia Bjorlin) is very obvious. If Kristen doesn’t learn to control her jealousy, she could blow her cover very easily. All it will take is the right person noticing Susan’s reaction toward Chloe. If Lani and Chloe were to talk, they could easily put this together. However, someone else may figure it out first.

Days of Our Lives Peter Kiriakis (Jay Kenneth Johnson) doesn’t make a habit of taking to the cops. However, Philip is rumored to speak to Kristen and quickly figure this out. Once Philip discovers the switch he could easily blow Kristen’s cover. However, Kristen could also ask for Philip’s help enlisting him to distract Chloe from Brady as well. Unfortunately, Susan’s growing attraction to Brady is still going to be a red flag no matter what. The closer Susan gets to Brady, the more obvious the switch becomes. Eventually, someone close to Brady and Kristen will figure this out. Who will be the first person to figure out the switch and what will they do about it?

If Days Of Our Lives Lani figures out that Kristen and Susan have switched places, will she cover for her again? Lani knows that Kriste could get in a lot of trouble for leaving the prison. Lani also knows she has to keep that knowledge from Eli. Will Lani discover Kristen’s secret and protect her?