Days Of Our Lives (DOOL) Spoilers: Xander Kiriakis Is Tempted To Return To His Criminal Ways 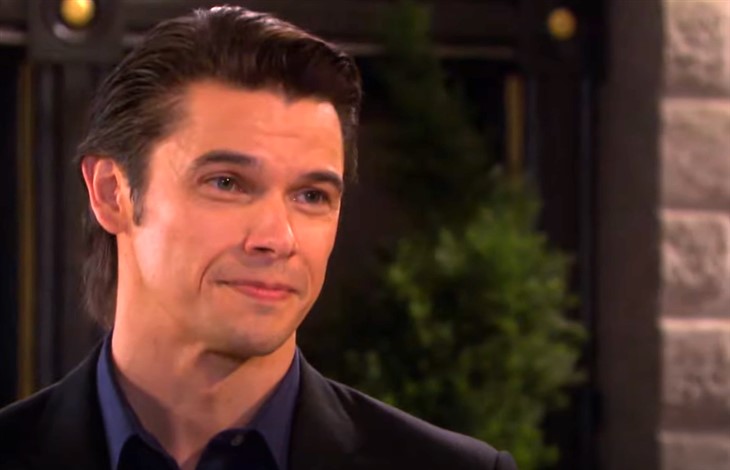 Days of Our Lives spoilers (DOOL) tease that Xander Kiriakis (Paul Telfer) is tempted to return to his criminal ways when Kristen DiMera (Stacy Haiduk) asks for his help in an upcoming episode of Days of Our Lives!

Days of Our Lives viewers will remember that since being fired from Titan Industries and Sarah Horton (Linsey Godfrey) “dumping him” and running off with Rex Brady (Kyle Lowder), Xander has neither a place to live nor a job! He was desperate enough to scheme with Chanel Dupree (Precious Way) during their brief “marriage” to try and scam her mother, Paulina Price (Jackée Harry) out of a large sum of money, which they were going to split. However, Paulina tore up the check and that scheme backfired.

Xander has to find some way to survive, and he’s not even been offered his former gardener job by Victor Kiriakis (John Aniston). Xander doesn’t want to be a gardener anyway after being a co-CEO! Xander once worked as somewhat of a mercenary, and also as Kristen’s henchman. Xander is really being tempted towards his former mercenary lifestyle, as he was very good at being a criminal and a henchman for hire. Days of Our Lives viewers will remember that Xander’s whole impetus for changing himself was his love for Sarah and Sarah’s love for him, and now that she is gone, he has been drinking pretty much nonstop trying to escape his severely broken heart.

Days of Our Lives viewers will recall it wasn’t Sarah who broke up with him at all, it was Kristen disguised as Sarah, and Sarah’s status is unknown, although it can be assumed she made it to the Greek island Kristen shipped her in a steamer trunk to!

Days of Our Lives viewers will also recall that Kristen is becoming very desperate and will become more so in future episodes of Days of Our Lives! Brady Black (Eric Martsolf) and several others including Eli Grant (Lamon Archey) know that Kristen has been out of Statesville Prison impersonating Susan Banks (Stacy Haiduk) for several months, and Kristen will be desperate to find a place to hide! Kristen, with a baby girl she will want to spend time with and see someday again, won’t return to quite the life of crime she once led, with Xander as her henchman, but she will have several kidnappings that police will eventually figure out that she did, with Kate Roberts (Lauren Koslow) leading the charge!

Kristen will likely offer Xander some money for either hiding her out or helping her flee Salem because she will have so many people after her, or she may even have one or two she might want to be eliminated permanently – but Xander might just draw the line there. He might help her get out of Salem for a price, which would possibly get him charged with aiding and abetting a fugitive, but it’s doubtful he would let himself be turned into what for all intents and purposes would be a hitman! Xander indeed is desperate and so is Kristen, but if he ever figured out what Kristen did to Sarah, it would be Xander who’d be hiring the hitman!