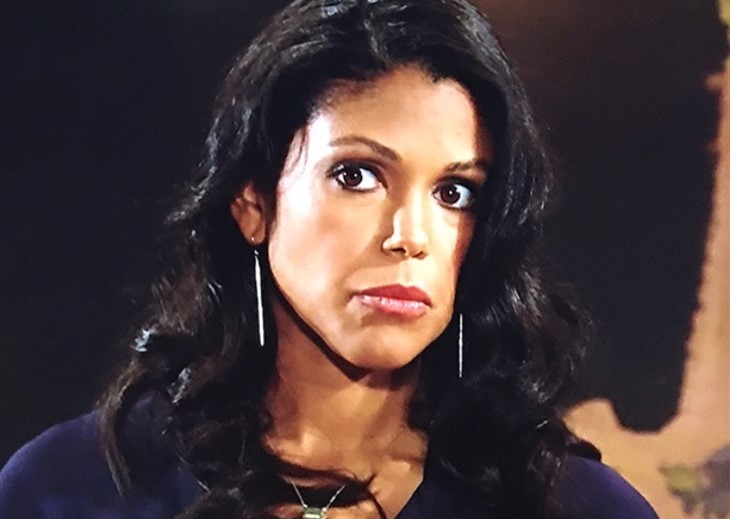 The Young and the Restless (Y&R) spoilers document that Amanda Sinclair (currently played by Karla Mosley) doesn’t trust her half-sister’s turnaround. She isn’t sure what to make of Imani Benedict’s (Leigh-Ann Rose) offer to help her with their grandfather’s case. But Amanda’s tell to Devon Hamilton (Bryton James) came after he misread Sutton Ames’ (Jack Landron) and Imani’s distantly witnessed conversation.

Imani was scolded by Sutton about her behavior at his luncheon. His granddaughter recognized that and said that he might be surprised at the real reason why she was going to see Amanda.

Devon believed he saw Sutton and Imani conspiring in the lobby at the Grand Phoenix Hotel. They weren’t, which neither proves nor disproves Sutton’s complicity in the crime he’s accused of committing.

Whether Imani truly has been affected by her parent’s take on Amanda in recent days remains to be seen. She may have realized that Amanda is working in the best interests of the family.

Maybe Rose’s character has gotten past her jealously and the initial reaction she had to Amanda’s existence? Then again, maybe not.

Naya Benedict (Ptosha Storey) believes that her father is innocent. She knows that Amanda is a strong lawyer and is in the unique position to help Sutton and bonding with the family as a result. Imani was rubbed the wrong way when Naya began giving attention to Amanda. Whether she’s still irritated remains to be seen.

Part of the system of justice in the United States is for the accused to be presumed innocent until proven guilty. Amanda is taking that approach with her grandfather, letting the facts lead wherever they might go.

It has become apparent that Amanda is increasingly charmed by Sutton. It’s natural for someone who discovered a biological family to be drawn to the head of it. Sutton is also a skilled communicator and clearly possesses the ability to influence those who, he’s around.

Did he have Richard Nealon (no actor known to be cast for this role) killed or handle that matter himself? Not enough information is known at this point in the storyline.

The Young And The Restless (Y&R) Spoilers: Will Sharon Choose Adam, Rey, Or Nick?https://t.co/iwCQkmNaDC

The Young And The Restless Spoilers – Amanda Sinclair Suspicious Of Sister

Amanda is right to be suspicious of Imani. Rose’s character came on so strong that it would be unwise for Amanda to simply accept the one-eighty that’s been offered.

Choosing to take Imani’s offer, where the law school graduate assists with Sutton’s case, is shrewd. Amanda will be able to learn what her sister’s current intentions are and potentially gain other useful information as well.