Days Of Our Lives (DOOL) Spoilers: Sami And Lucas Desperately Look For A Way To Escape 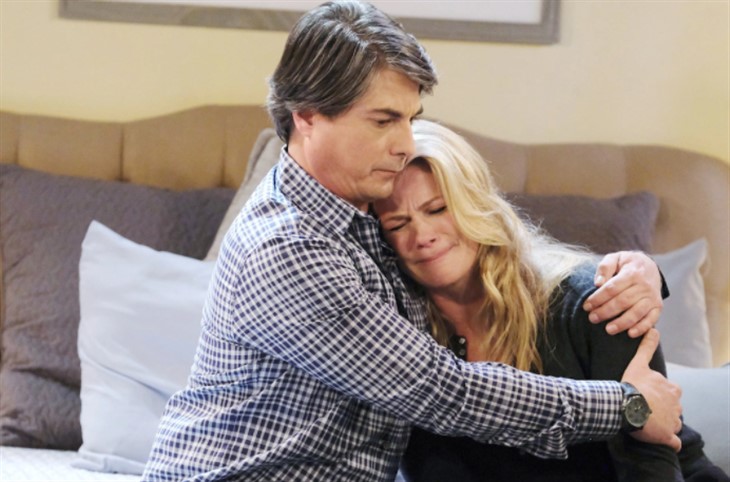 Days of Our Lives (DOOL) spoilers tease that Sami DiMera (Alison Sweeney) and Lucas Horton (Bryan Datillo) will desperately look for a way to escape in an upcoming episode of Days of Our Lives!

Days of Our Lives viewers will recall that when Kristen rushed to Salem University Hospital when Sami told her Brady Black (Eric Martsolf) had been brought in, Kristen came as Kate Roberts (Lauren Koslow). Both Sami and Lucas thought it strange that “Kate” didn’t seem to give a care in the world that Lucas had a terminal brain tumor – not that he really had one – and rushed off elsewhere. Chloe Lane (Nadia Bjorlin) was suspicious too when “Kate” showed up so concerned about Brady. Sami tried to tear her Kate mask off when she came up to her and Lucas at the nurses’ station, but Lucas stopped her.

It was enough for Kristen to know that something had to be done with Lucas and Sami though because Lucas was suspicious as well, and later went to check with Philip Kiriakis (Jay Kenneth Johnson) if he had heard from their mother. That’s when he found out for sure that “Kate” wasn’t Kate! Meanwhile, the real Kate was crawling through the woods on the ground trying to get to the DiMera mansion and Jake DiMera (Brandon Barash)! Kristen went into a different part of the hospital after the encounter in Brady’s room with Chloe and changed into a different disguise – as a surgeon! Days of Our Lives viewers will recall that Sami left Lucas in the hospital as she headed out to find John Black (Drake Hogestyn) and her mother, Marlena Evans (Deidre Hall) to let them know about Brady. Kristen will catch up to both of them!

Days of Our Lives viewers will remember that when Kristen is pushed to her limits, she pretty much goes crazy. Days of Our Lives viewers will remember that the reason she has been in prison in the first place is because of the death of Haley Chen (Thia Megia) who she pushed down a flight of stairs as she ran, crazy with grief in Salem University Hospital after she was falsely told that her baby died. Now she is crazy with jealousy over Brady and obsessed with the idea that he has left her for Chloe, in spite of his past efforts to assure her that he has not and never would!

Days Of Our Lives (DOOL) Spoilers: Jake DiMera Pours His Heart Out To Gabi Hernandezhttps://t.co/wlGA1C2XiE

Kristen is upset that Sami and Lucas’ plan to keep Chloe’s attention away from Brady didn’t work, and now that he had been in an accident with internal injuries in the hospital Chloe has glommed even more onto Brady, and she’s another one that Kristen has to eliminate, possibly permanently! First Kristen knocks out Sami and drags her down to the DiMera wine cellar, shortly following her with Lucas!

Sami and Lucas know that Kristen has gone insane and dangerous again and when she returns for them, it may be to kill them! They cannot get anyone’s attention no matter how loud Sami screams, and they have to find some way to break out of the room to save their lives!