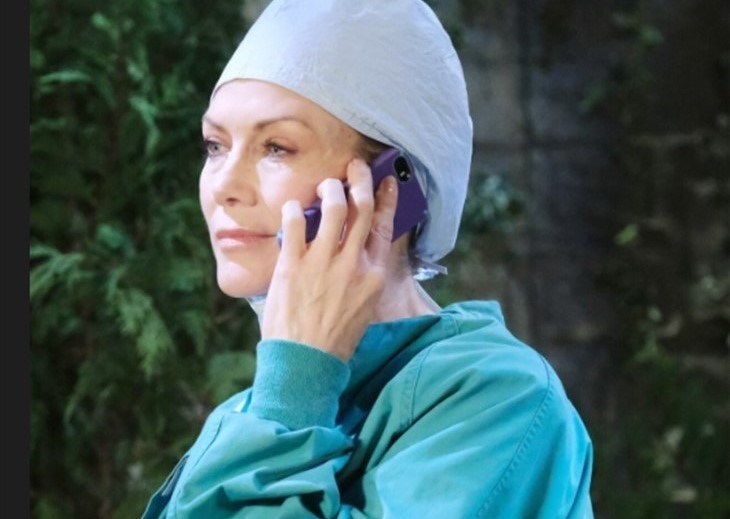 Days Of Our Lives Spoilers – As Kristen DiMera Fled With Kate Roberts, Kate Woke Up!

Days of Our Lives viewers will recall from recent Days of Our Lives episodes, that as Kristen DiMera fled the DiMera mansion with Kate Roberts (Lauren Koslow) stuffed in a duffle bag, Kate woke up in the car! Kristen had barely made it out of the mansion with Kate, who she had injected with something to make her pass out in the DiMera wine cellar.

According to Days of Our Lives recaps and spoilers, Kate had discovered that Kristen was impersonating Susan Banks (Stacy Haiduk) and Kristen had no choice but to knock her out and drag her into the wine cellar. It is a supposedly secret room but everyone seems to know about it – it probably was secret when Stefano DiMera (Joseph Mascolo) still lived in the mansion!

Kate managed to struggle out of her duffle bag prison in the car, as Kristen was driving, apparently on the way to get Kate to the same Greek island she stashed Sarah Horton (Linsey Godfrey) on. However, Kate was conscious so she couldn’t just stuff her in a steamer trunk like she did Sarah on Days of Our Lives.

Then there was the thing that Kate is taller than Sarah and probably wouldn’t have fit. As Kate struggled with Kristen with Kristen’s hands on the wheel, Kristen crashed into another vehicle; she was horrified to realize the driver was Brady Black (Eric Martsolf)! It appears while Kristen is blindsided by seeing Brady injured, Kate escapes.

Days of Our Lives promo photos show Kristen outside at night, dressed as a surgeon, and calling someone on her phone! It sounds like Kristen wants to be in the operating room when Brady is worked on, or it may just be her disguise.

Days of Our Lives viewers will recall that before Brady got out on the road he had been visiting “Kristen” at Statesville Prison and found out she was Susan impersonating Kristen! Susan slipped up in her impersonation and he caught it and got the truth out of her. He couldn’t believe he had been fooled for all those months, and he was headed straight to round Kristen up and get her back into the prison before even worse things happened!

Days Of Our Lives Spoilers: Stacy Haiduk Taking Some Time Off – Kristen DiMera Goes On The Run Againhttps://t.co/fjv9h6Nzk0

Brady appears to be bleeding from the side of his head as he calls for help, his head up against the airbag and the steering wheel. No matter what else is going on and what else Kristen will have to do to keep her identity a secret, she has to be with Brady! She has no idea that Susan came clean to Brady at the prison, and she has to find a way to make sure Chloe Lane (Nadia Bjorlin) doesn’t interfere with their relationship.

According to Days of Our Lives spoilers, Kristen doesn’t know yet if Sami DiMera (Alison Sweeney) and Lucas Horton (Bryan Datillo) have been successful in getting Chloe and Brady separated, so she has to be in Salem University Hospital and perhaps even in the operating room if he has to have an operation to make sure he is okay and Chloe isn’t there!