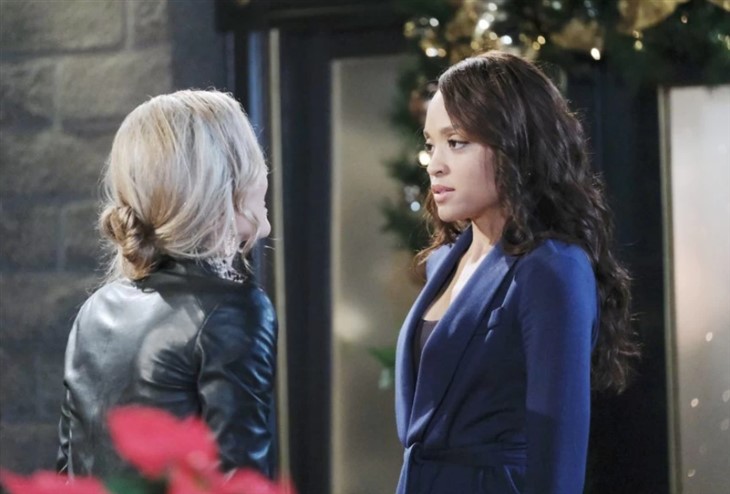 Days of Our Lives (DOOL) spoilers reveal that Eli Grant (Lamon Archey) tells Lani Price Grant (Sal Stowers) about Kristen DiMera’s (Stacy Haiduk) mask-wearing scheme. Lani will end up confronting her BFF. However, she won’t promise to keep Kristen’s secret and isn’t understanding. In fact, Kristen is informed that her masquerade party is over!

DOOL spoilers reveal that Eli learns that Kristen is no longer in prison and Susan Banks (also played by Haiduk) is in her place. Eli will be horrified and furious over Kristen’s latest scheme. The lookalikes haven’t been switching places for just days or even a few weeks. It’s been quite a while and most of Salem was clueless. The people that did find out kept it a secret and others disappeared. Eli will tell Lani what her BFF has been up to, which will send her reeling.

During the week of May 17, Lani confronts Kristen. It’s not known if Lani calls Kristen and tricks her into a meeting or if she just comes across her in Salem accidentally. In either case, Lani will have a serious talk with Kristen. In a sneak peek photo, Lani is holding Kristen’s hands and appears to be listening to what she has to say. However, Lani is beginning to realize just how far gone Kristen is. She is no longer the woman that Lani bonded within the Italian convent.

Days Of Our Lives Spoilers – Lani Price Grant Is Done

Days of Our Lives spoilers reveal that Kristen will beg Lani to turn a blind eye. However, the caption of the photo in Soap Opera Digest states that Lani informs her BFF that the jig is up. So, it sounds like Lani refuses to put herself on the line for Kristen’s antics anymore. This will be a relief to fans, who never really understood Lani’s loyalty to the villain. The detective nearly lost her husband, children, and even her freedom for Kristen.

Days of Our Lives (DOOL) Spoilers: Jake And Gabi Race To Save Kate https://t.co/Lo9zL5N4r9 pic.twitter.com/YLBEncgXS1

DOOL Spoilers – Masquerade Party Is Over

Even though Lani says the masquerade party is over, Kristen probably won’t accept that. Will she try to get rid of her alleged “friend” just like everyone else? Or will Lani be able to bring Kristen in without any drama? One thing we know for sure is that Kristen is back in prison soon. It is teased that the real Kristen begs Brady Black (Eric Martsolf) not to abandon her. However, he is done. It looks like Kristen not only loses her best friend but her lover too.

What do you think is going to happen when Lani confronts Kristen? Will she turn herself in peacefully or could Kristen try to hurt Lani? We will have to keep watching the NBC soap to find out what happens next.