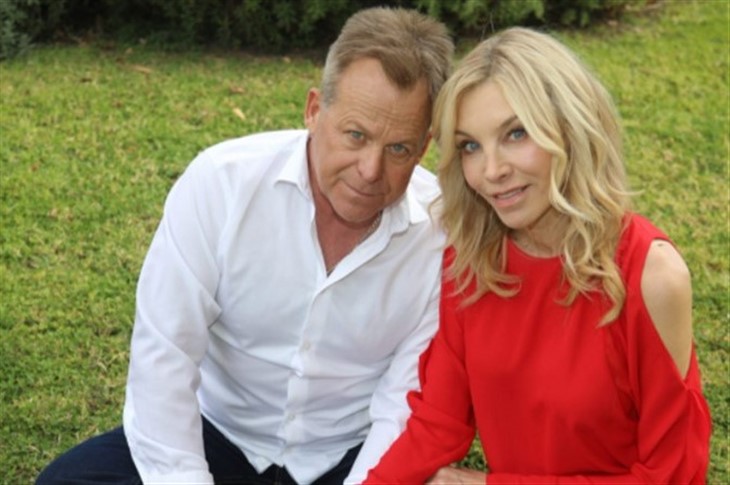 General Hospital (GH) spoilers tease that Trish Ramish is the actress playing the Metro Court barmaid. If she looks familiar she should since she has guested on the ABC soap before.

In 2019 Ramish popped up in Port Charles when she was hired to play Trish. Trish was the red-carpet coordinator for that year’s Nurses Ball event and she and Shriner actually shared a scene together.

GH Spoilers – A Familiar Face Returns to The Soap

This year Ramish and Shriner did a joint interview with Soap Opera Digest and we have the scintillating story for you here.

For starters, Ramish outlined the couple’s history which began in 1994. “I was having dinner with my cousin at my friend Bob’s restaurant and Kin was eating dinner at the bar because he knew the waiter, who was a mutual friend of ours. He said to Bob, ‘Who’s that girl you’re talking to?’ and he said, ‘That’s my friend Trish, she’s one of Cher’s dancers. Why, do you want to ask her out?’ And Kin said, ‘She’s out of my league.’ How sweet is that? But he asked me out anyway, a couple of weeks later, and of course, I said yes.”

Shriner chimed in, “When we met, I had recently built a house in the hills up in Beverly Glen and I remember she liked the custom Jacuzzi bathtub that had never been used because the house was relatively new and I was more into steam showers. I think she started dating me to get that bathtub!”

Since then the two have traveled far and wide together but COVID put a crimp in their plans.

They both love the Bahamas: “We love the Bahamas. We’re so sad we can’t go this year because of Covid,” said Ramish, and Shriner added, “She likes the beach; she’s perfectly fine laying out on the beach or poolside. I’m a little more active on a vacation.”

They also enjoy a cozy home life with Ramish sharing that her partner’s best domestic skill is cooking.

“He loves food and he’s like, ‘How can I be with some girl who doesn’t cook?’ But he’s very good at it and I love the food that he makes.”

They also enjoy watching plenty of tv together which makes sense since they’re both actors.

Ramish said they like to watch Dexter, Bill Maher, and Your Honor.

According to her Shriner does have one rule: “Anything that’s really girly, he won’t watch. The Prom on Netflix is a recent one.”