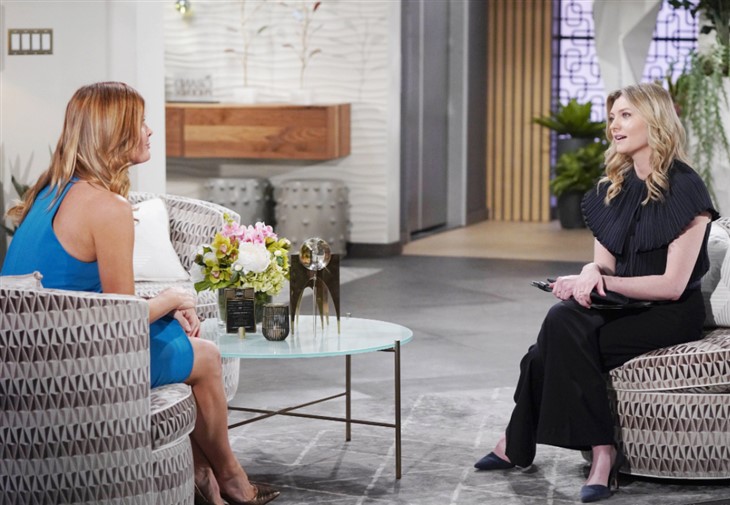 The Young and the Restless (Y&R) spoilers document that Phyllis Summers (Michelle Stafford) made a sharp tactical move. She actually came clean with Tara Locke (Elizabeth Leiner), which was part of a brilliant play.

Phyllis knows that Tara has gotten the first part of what she wants and has momentum. If Stafford’s character is to thwart Tara’s efforts to permanently end Skyle and couple with Kyle Abbott (Michael Mealor), then guerrilla tactics must be employed.

So, Phyllis told Tara that she faked befriending her, admitted to being triggered because of her own embarrassing past, and then threw down the gauntlet in the beautiful lobby of the Grand Phoenix.

Phyllis senses that Tara and Sally Spectra (Courtney Hope) teamed on the plot that caused Summer Newman (Hunter King) to quit her job, accept another in Milan, Italy, and to voluntarily end Skyle.

Red also believes that since Tara is clever, she can’t fully trust Sally. Phyllis intends to play into Tara and Sally’s fragile alliance.

Sally is no friend of Phyllis because of Jack Abbott (Peter Bergman). So undermining whatever the connection is between Tara and Sally is intended to kill two soapy birds with one stone.

Yes, Tara was able to miraculously get Summer to agree to leave Kyle and Genoa City, Wisconsin. But the fact that King’s character didn’t tell Kyle the whole truth deeply stretches believability.

Kyle doesn’t know that Tara threatened Summer, by telling her that she would leave town with Harrison Locke (Kellen Enriquez). That alone would infuriate him and break the parental bond he has established with Tara.

Sally’s warning to Tara, about both of them going down if either was ever exposed, winks at the fans as to what’s coming.

The Young And The Restless Spoilers – Goodbye Follows Restoration

Phyllis sees a number of steps ahead. She knows that if Tara and Sally turn on each other, then the chances either person ratting out her partner in this moral crime improve in Summer’s favor.

Viewers know that King and Mealor are confirmed as having not renewed their contracts. So, Phyllis is clearly heading toward what appears to be a bittersweet victory.

All is revealed, which allows Skyle to reunite. But Summer and Kyle will do so in Milan, Italy, into the indefinite daytime future.