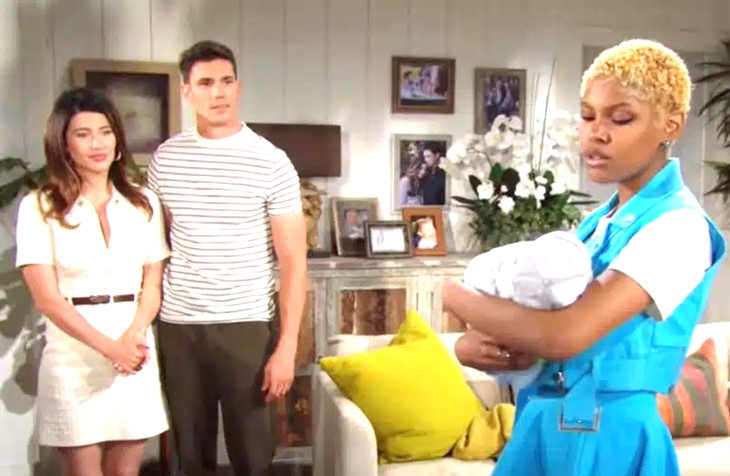 The Bold and the Beautiful spoilers document that the cliff house has been totally transformed since last year. Rather than being the location of emotional, Steam-based nostalgia for Steffy Forrester (Jacqueline MacInnes Wood), this iconic B&B set now includes a new family and a new friend.

Steffy Forrester Finnegan is the anticipated name change. John Finn Finnegan (Tanner Novlan) has firmly replaced Liam Spencer (Scott Clifton) as the man in Steffy’s life. Along with that, Hayes Finnegan Forrester (no baby actor’s name known for this role) has increased the Finn family from three, which includes Kelly Spencer (Avalon and Colette Gray), to four.

Now, there is also the added benefit of inviting the super sweet Paris Buckingham (Diamond White) into this warm setting.

The Bold And The Beautiful (B&B) Spoilers: Carter And Quinn Play With Fire And Could Get Burned

There is a bit of drama to play out as Steffy gets set to meet Finn’s parents. The arrivals of Jack Finnegan (Ted King) and Li Finnegan (Naomi Matsuda) will lengthen Finn’s backstory.

Finn’s personal history has rarely been referenced. He did tell Steffy that the offered engagement ring was his mother’s. That implies Finn’s birth mother is deceased. Among other possibilities, that lady and Jack could have divorced as well.

After pleasantries are exchanged and whatever family stories are told, it’s time for the Finn wedding to happen.

Paris is the polar opposite of her flighty sister, Zoe Buckingham (Kiara Barnes). Kudos to Barnes for taking the scripts she was given and creating a character that could evoke sympathy from the audience, during the failed marriage attempt to Thomas Forrester (Matthew Atkinson), while also causing fans to shake their collective heads.

B&B devotees weren’t surprised that self-involved Zoe was trying to force Paris out of her newly obtained job and also push her out of Los Angeles, California. Zoe’s attempt to secure Zende Forrester Dominguez’ (Delon de Metz) affection flopped badly, with Paris becoming the woman he wants to be with instead.

Adding Paris to an already upbeat cliff house is a great play. But daytime is about drama, so what’s on the horizon?

The Bold And The Beautiful Spoilers: ‘Bridge’ Collapses, Brooke’s Next CEO Stunt Unforgivable?https://t.co/JjR1lY2zZv

The Bold And The Beautiful Spoilers – Keep It Classy B&B

The fans have no interest in seeing Sinn broken so soon after they just coupled. So, Steffy becoming involved with Liam Spencer (Scott Clifton) for the millionth time or Finn having his head turned by any women other than his fiance wouldn’t be right.

B&B needs to develop this family and enable Paris to become Steffy’s go-to friend and confidant. It would be cool to see Finn’s parents remain in LA as well. Those veteran actors have the chops to perform beyond brief stints.