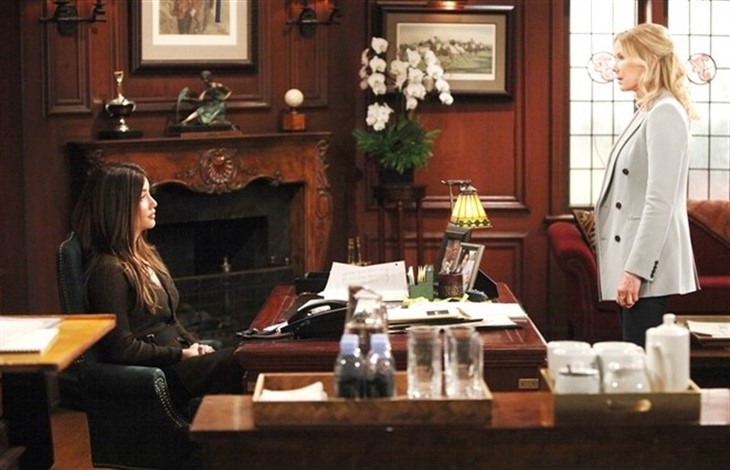 The Bold and the Beautiful spoilers document that Ridge Forrester (Thorsten Kaye) didn’t recognize the start of what appears to be a new storyline. He was looking at the glam photos Brooke Logan Forrester (Katherine Kelly Lang) seemingly scheduled for her own aggrandizement, which included having Ridge drawn into the frame.

As viewers saw, Brooke was okay with the mistaken headline that listed her and Ridge as co-Chief Executive Officers at Forrester Creations. The implication is that it wasn’t a mistake, but a wink toward Brooke believing she deserves a higher profile at the fashion house.

Ellen von Unwerth, the real life famous fashion photographer, was quite the get for Brooke. Having her happen by FC was a cool part of a recent episode that reminded fans of days gone by on this iconic soap, where flash and bedazzle were regular parts of the show.

Now that life has been returning to a general normal, following the brunt and early uncertainty of last year’s health crisis, it appears as though B&B is returning to more splashy scenes.

Brooke knows that Steffy Forrester (Jacqueline MacInnes Wood) has just given birth to Hayes Forrester Finnegan (no baby actor’s name is known for this role). Steffy is also recently engaged and is now planning to marry John Finn Finnegan (Tanner Novlan) in the near future.

With Steffy’s hands being full, Brooke senses the opportunity to advance her career. Lang’s character is also counting on Bridge being in a good space and therefore playing into and off that.

Brooke has longevity over Steffy. Whether Brooke deserves to displace Steffy as co-head of the company that Eric Forrester (John McCook) and Stephanie Forrester (Susan Flannery) co-founded is debatable.

The Bold And The Beautiful Spoilers: Who Crashes Steffy’s Wedding And Why? ‘Mystery Woman Not Finn's Momhttps://t.co/rezicxqxSZ

Sloughing off Brooke’s soon to be realized intent wouldn’t be wise. Steffy is sharp. However, her acumen alone isn’t enough to assume power will be retained.

Ridge will be challenged to make a decision that satisfies his wife and daughter. Here’s hoping that he finds a way to satisfy her desire to do more at FC, while also not undercutting Steffy’s presence and importance.