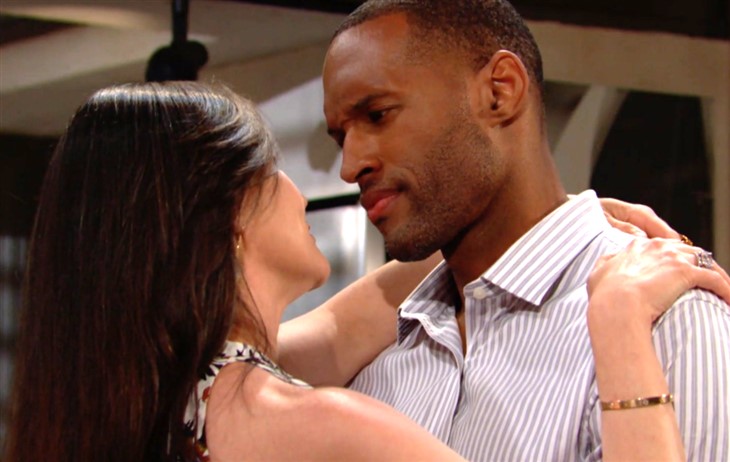 The Bold and the Beautiful (B&B) spoilers document that Carter Walton (Lawrence Saint-Victor) has no intentions of ending his rapidly developing relationship with Quinn Fuller (Rena Sofer). She’s the new love of his life, with fans recalling that Zoe Buckingham (Kiara Barnes) held that title in a period of time that can still be reasonably counted in weeks.

Loyalty to Eric Forrester (John McCook) and Ridge Forrester (Thorsten Kaye) was considered as part of friendship, rather than just business. But Quinn has turned Carter’s head away from the Forrester’s and toward her smiling face.

While Quinn is no doubt alluring, is it worth it for Carter to be pursuing this soapy course? Maybe, which can be read as a surprising answer.

The Bold And The Beautiful Spoilers – Eric Forrester’s Harsh Reaction

Eric reacted harshly when learning about Quinn’s deception and betrayal. He told her to leave their home and that he was filing for divorce.

However, Eric responded far differently to Carter, believing that he was simply caught in Quinn’s spell. Eric was spellbound for approximately five years. So, consideration for Carter’s infatuated state of mind was surely part of Eric’s calculation.

What’s happened to-date implies that Eric will divorce himself from Carter when the active Quarter connection becomes known and is acknowledged. Why would anything other happen?

As for Carter, he specifically objected to Eric’s snap decision to end the jewelry line. Eric reconsidered and reversed course, based on Carter’s profit margin facts.

However, it will be intriguing to see if Eric drops his chief legal counsel and then tries to push Quinn out of Forrester Creations. That could spark a confrontation and potentially lead to unexpected outcomes.

Will Eric allow Quinn to retain her connection to the jewelry line after he determines that she’s remained involved with Carter? That question might need to be answered in court.

In that projected circumstance would Carter push for Quinn to be granted legal say or control of FC’s accessory division? Maybe a lucrative buyout takes place instead?

With whatever happens, Queric’s dissolution and the building conflicts make for good storylines on this iconic soap.