The Bold And The Beautiful (B&B) Spoilers: Quinn Blames Eric For Marriage Failure – Does She Forget Reality? 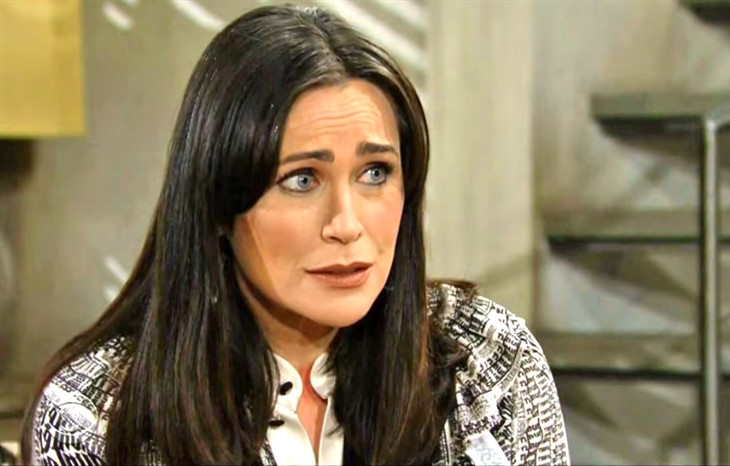 The Bold and the Beautiful (B&B) spoilers document that Quinn Fuller (Rena Sofer) contradicted herself in front of her soon-to-be ex-husband. In Quinn’s mind she’s always the victim. Others, in this instance Eric Forrester (John McCook), don’t give her enough consideration. Yeah, right.

The unmitigated gall of Quinn’s defense of herself was fully offensive. And that word, offensive, is nearly devoid of meaning in modern times due to its overuse. But Sofer’s character deserves to be totally tagged with it, one-hundred percent.

Eric is just beginning to realize the value of what’s happened. He is finally released from the emotional shackles Quinn had on him and is now flying free as a bird in daytime.

Just as there were some words that made sense during Quinn’s self-promoting rant, she also spoke some bits of truth. As the cliche goes, a broken clock is right twice a day, if it has hands. A digital clock or watch is right once a day, if it flashes a fixed time.

The two, trite sentences in the last paragraph where dropped to reinforce something Quinn said to Eric. She noted that Brooke Logan Forrester (Katherine Kelly Lang) was against their marriage from the beginning.

Well, Brooke has been proven right. She isn’t relishing that outcome, as Eric was badly treated over time and recently had his heart broken.

Flo Logan (Katrina Bowden) told Wyatt Spencer (Darin Brooks) that she understood where Quinn was coming from. Would Flo have said that if she didn’t reveal that she thought Carter Walton (Lawrence Saint-Victor) was attractive? Maybe not.

Quinn used Eric’s feelings of betrayal against him. Quinn’s assertion that Eric left her alone for months, while they were still married, would be a good point if it weren’t for one glaring weakness in that argument. She generated the betrayal of trust in the breaking Bridge storyline.

Eric didn’t neglect his wife. He was alienated by Quinn’s choice to interfere in Ridge Forrester’s (Thorsten Kaye) marriage. That would be the same Ridge, meaning his adopted son, that she kissed on the beach in the not too distant past while Queric was married.

The Bold And The Beautiful Spoilers – Quinn Fuller Believes In Herself

How much time will it take for Quinn to disrupt Carter’s life, beyond what she’s already done? And it’s understood that Carter is an adult, who is willingly involving himself with her, despite Eric’s demand that he not.

Quarter replaced Queric, which sparked divorce proceedings. When this legal matter will officially be resolved is in question because Carter is representing Eric and Quinn told McCook’s character that she hasn’t hired a lawyer.

B&B Spoilers – Eric Forrester Is About Family And Friends. Contrast That With Who Quinn Fuller Is.

Does Quinn have a track record of supporting family? And B&B had to invent a friend, Shauna Fulton (Denise Richards), for Sofer’s alter ego.