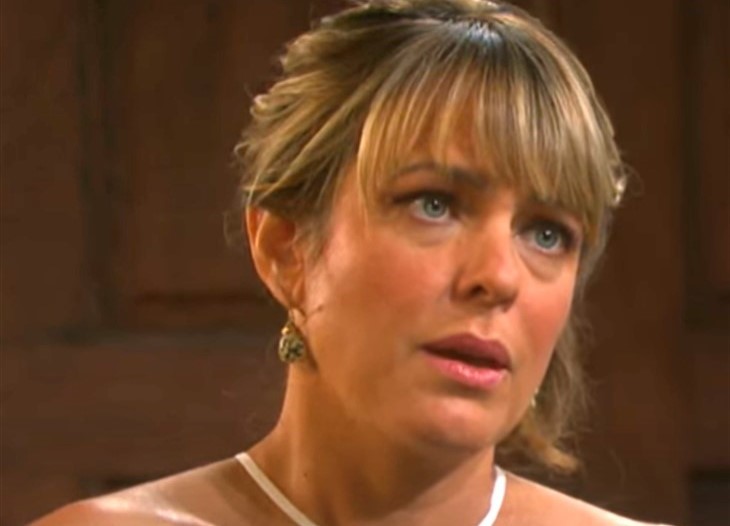 Days of Our Lives (DOOL) spoilers tease that Nicole Walker (Arianne Zucker) won’t like what EJ DiMera (Dan Feurreriegel) wants her to do in an upcoming episode of Days of Our Lives!

Xander would not have a way to survive otherwise, and so he really put the pressure on EJ to keep up the part of his bargain related to getting Xander’s job back. EJ figured he could easily do that, seeing that Basic Black is a division of DiMera Enterprises. So, EJ gets to work getting Xander his job back as promised so he will get his money back as demanded!

DOOL Spoilers – Brady Black Is Out Of Town

Days of Our Lives viewers will recall that Brady is out of town with Chloe Lane, (Nadia Bjorlin) and Nicole was actually taking a week off. Brady and Chloe had been going on a business trip to New York City, but got stuck in Pennsylvania when the plane was grounded.

So in order to get Xander’s job back, EJ will reach out to Nicole, even though she isn’t working right now. Nicole would just as soon Xander didn’t exist – it was her drunken indiscretion with Xander that caused her marriage to Eric Brady (Greg Vaughan) to end, even though Sami played a big part in it as well, paying Xander to out their affair at their celebration at Brady’s Pub!

Nothing is more humiliating than being exposed as an adulteress with someone one’s husband despises in a public place celebrating a first anniversary! The last thing that Nicole wants or needs, as Days of Our Lives viewers can imagine, is having to see Xander every day at work!

Days of Our Lives viewers can imagine that EJ’s pitch to Nicole about hiring Xander back is going to be a very hard sell! Besides, Nicole might reason with EJ, even if she did hire him Brady would just fire him again! EJ tells Nicole that he will handle any objections that Brady might have – EJ doesn’t tell Nicole this, but he could always pull rank over Brady and threaten to replace him with Xander if he didn’t comply!

Besides, EJ isn’t happy with Brady for hurting his sister Kristen DiMera (Stacy Haiduk) the way he did – even if she deserved it. EJ is loyal to her but even EJ admits some of her schemes are a bit over the top – even worse than Sami’s! Nicole continues to balk at EJ’s request, but he doesn’t give up that easily, as Days of Our Lives viewers know!

Stay tuned to Days Of Our Lives, and keep checking Days of Our Lives spoilers frequently for all the latest news, updates and developments!