The Bold And The Beautiful (B&B) Spoilers: Logan Sisters Won’t Back Off – Donna Takes Quinn’s Place 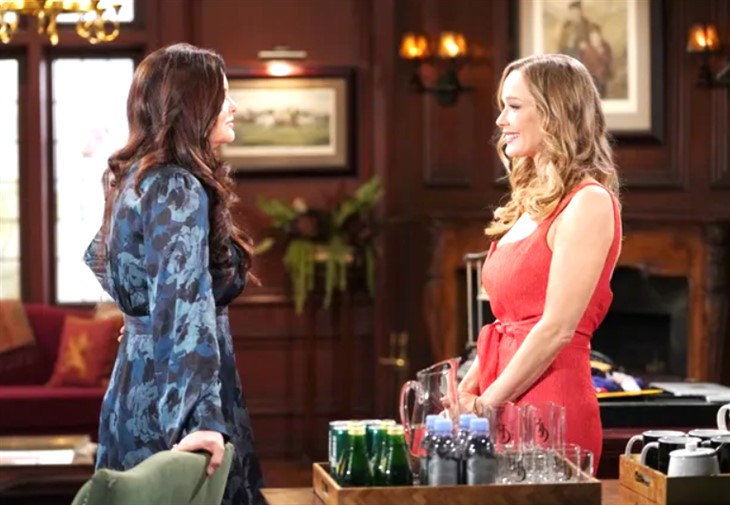 The Bold and the Beautiful (B&B) spoilers document that the Logan sisters are determined to help Eric Forrester (John McCook) extricate himself. Quinn Fuller Forrester (Rena Sofer) is believed to be the cause of Eric’s perceived sorrow.

Little do Brooke Logan Forrester (Katherine Kelly Lang), Donna Logan (Jennifer Gareis), and Katie Logan (Heather Tom) know that Quinn rejected Eric’s grand gesture plan. It would not be wise for any of those three particular Eric fans to ever learn about his Quarter proposal.

The fans continue to see Donna pining away for Eric, with the implication being that the one-time married couple will reconcile. But Eric still loves Quinn and she has just demonstrated her love for him by rejecting his Quarter proposal.

The Bold And The Beautiful Spoilers – Carter Walton Was Taken Aback

Carter Walton (Lawrence Saint-Victor) told Eric that he was deeply bothered by the unexpected and unseemly plan that was proposed. He told McCook’s character that he must listen to him at work because he is the boss. But when it comes to his personal life, Eric does not hold sway.

Quinn and Carter had a long discussion in the Forrester mansion’s beautiful living room after Eric left them and trotted up the stairs to Queric’s bedroom. The one-time Quarter decided that they could not follow Eric’s directive.

Saint-Victor’s character felt that Eric was not thinking straight, though his proposal reaffirmed how much he loves Quinn. She agreed while trying to wrap her mind around all that was said.

If Quinn does not accept Eric’s offer at any point in the future, then she will commit herself to a limited lifestyle. That is not something she anticipated.

So, it is reasonable to believe that Quinn will not remain frozen in place forever. Teasers also indicate that she and Carter will have an opportunity to reconsider possibilities.

An intriguing aspect of this scenario involves speculation about what Quinn will admit. Might she feel compelled not to tell Eric if Quarter continues? If she does not, will he feel offended at her lack of honesty?

The Bold And The Beautiful Spoilers – Donna Logan Rekindles The Flame

Eric believes that he is no longer who he once was. But that viewpoint could be fully tied to Quinn.

Donna is in love with Eric. She serves as one of his executive assistants at the office and sees him regularly. The clear wink is in place as a result.

No matter what happens with Quarter, Donna is projected as the lady who helps Eric reclaim normalcy and with that, this one-time married couple could be destined to revive.

Prev Next
No Comments
Leave A Reply
Cancel Reply
For All The Alaskan Bush People News!