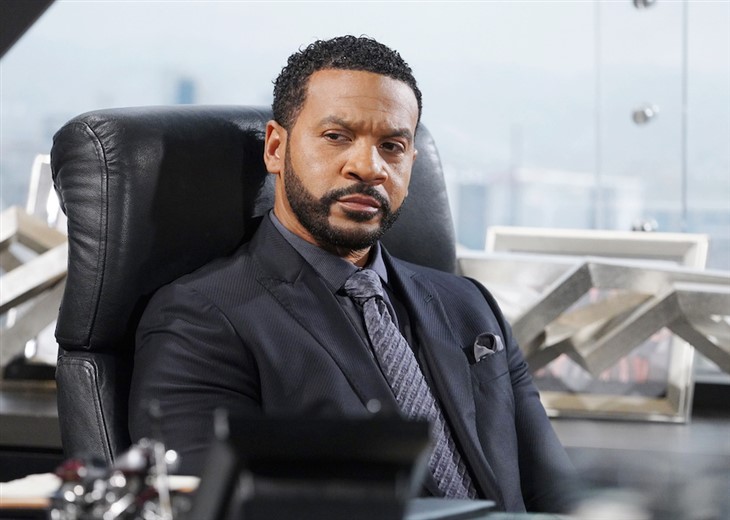 The Bold and the Beautiful (B&B) spoilers reveal that Ridge Forrester (Thorsten Kaye) has a special undercover assignment for Justin Barber (Aaron D. Spears). With that happening at the same time as “Bridge” is determined to find answers about Quinn Forrester (Rena Sofer), the two are connected. What will Eric Forrester (John McCook) say when confronted with a “discovery?”

The Bold And The Beautiful Spoilers – Justin Barber’s Services

B&B spoilers reveal that Justin suddenly found himself without a job when Bill Spencer (Don Diamont) fired him. Of course, Bill had every right to terminate Justin’s employment considering what he did to him. Justin’s next stop was Forrester Creations where he approached Ridge with a deal. Even though Justin hasn’t been seen since, he will be part of a new story during the week of September 20.

Ever since Eric and Quinn reunited, there has been concern from several different characters. For one thing, Eric secretly brought Quinn back into the house. The patriarch didn’t say a word to anyone, including those closest to him.

Something else that is bothering Eric’s loved ones is all the secrecy. Ridge has tried to get Eric to open up about his marriage problems and reconciliation, but he’s not getting any answers. The Logan sisters are finding the same thing, that suddenly Eric is being very secretive.

The Bold And The Beautiful Spoilers – Going Undercover to Expose ‘Quarter’

The Bold and the Beautiful spoilers reveal that during the week of September 20, Ridge will give Justin a special assignment. Justin is asked to go undercover, which can only be about Eric and Quinn. Ridge and Brooke will be so worried that they will go to extremes to protect Eric. They have no idea that Eric has given Quinn and Carter permission to be together intimately. So, when Justin starts following Quinn and sees she is with Carter, everyone will assume it’s another secret affair.

Justin will bring the proof to Ridge and Brooke, who will be furious with Quinn. “Bridge” will probably confront Eric right away to let him know Quinn is betraying him yet again. By this time, Eric will have already covered for Quinn when Katie Logan (Heather Tom) began asking questions.

So, what does Eric do when confronted with “proof” of Quinn and Carter being together? Will he tell the truth about this new chapter for his marriage or will he be angry that others are snooping into his private business? Ridge and Brooke will not give up, especially if they feel that Quinn is taking advantage of the situation. We will have to keep watching the CBS soap to find out what happens next.