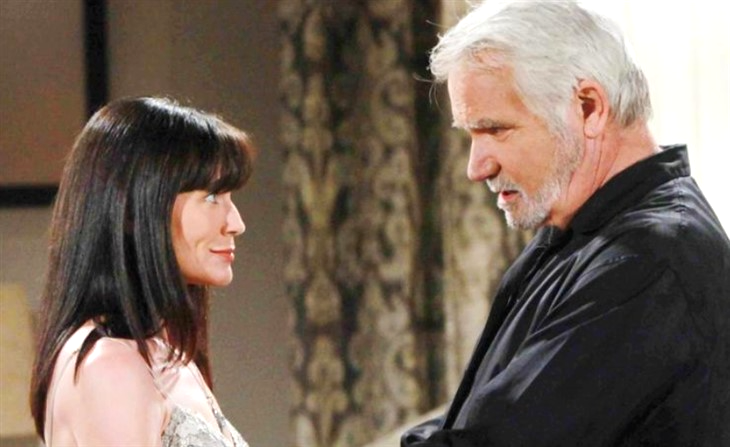 The Bold and the Beautiful (B&B) spoilers reveal that Quinn Forrester (Rena Sofer) and Shauna Fulton (Denise Richards) catch up. Quinn might admit that the reconciliation is strained. Eric Forrester (John McCook) secretly listens in on the private conversation. It turns out that Eric gets a new perspective on marriage, but what exactly does that mean?

The Bold And The Beautiful Spoilers – Eric Forrester’s Problem

B&B spoilers reveal that Eric asked Quinn to come home and she did. However, the reconciliation hasn’t been as smooth or joyous as either spouse imagined. Eric finally admitted why he’s been pretending to be asleep and the reason he kept rejecting Quinn. When Eric explained that he had erectile dysfunction, Quinn felt even worse about betraying her husband. However, it also gave her an explanation, which is what she was missing all the times she was rejected before.

Eric is bouncing from one extreme to the other. He wants to work on his marriage to Quinn but at the same time, worries that she won’t be happy without intimacy. Quinn has suggested doctors, specialists and alternative treatments. However, Eric insists that nothing can be done about his condition.

Quinn tried to reassure him that she wasn’t going anywhere, that she loved him no matter what. Even though Eric would like to believe this, he knows how important passion is to Quinn.

The Bold And The Beautiful Spoilers – Shauna Fulton’s Suggestion

The Bold and the Beautiful spoilers for the week of September 6 reveal that Quinn and Shauna will have a private conversation. Shauna probably wants an update on how things are going with the reconciliation. Quinn can’t hide anything from her best friend, so she might tell her about Eric’s diagnosis. Shauna could also learn that Eric worries about not being able to make his wife happy. Quinn won’t know how to reassure Eric or how to help him. It’s quite possible that Shauna will have some advice. Shauna might suggest that there are other ways to be intimate.

It is confirmed that Eric eavesdrops on Quinn and Shauna’s conversation. It is stated that he gets a new perspective on marriage, which sounds optimistic. It sounds like what Eric overhears might give him some fresh ideas that just might save his marriage.

We know that Eric goes all-out when planning a surprise romantic dinner for Quinn. It is also stated that Eric tries his best to woo the woman he loves. Does “Queric” still stand a chance? We will have to keep watching the CBS soap to find out what happens next with this storyline.