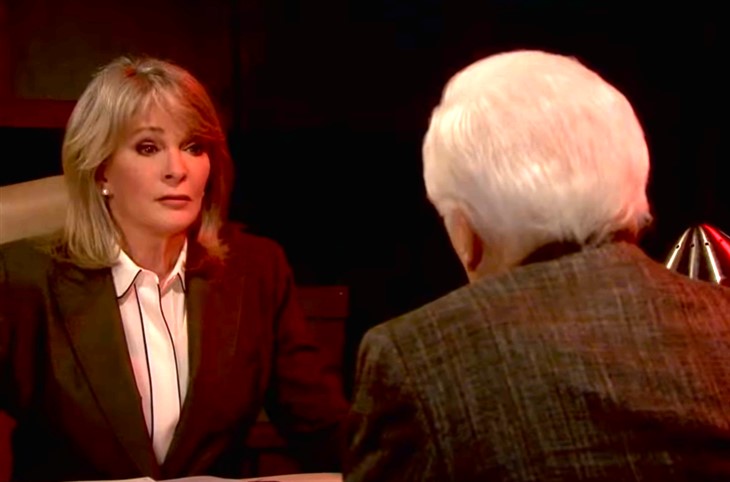 Days Of Our Lives (DOOL) spoilers and updates reveal a quarter of a century later the demon has come calling again. The possession has begun with another, but Dr. Evans knows she is the real target.

Friday in Salem the Devil made his presence known while Marlena Evans (Deidre Hall) was having a session with Doug Williams (Bill Hayes). She brought up Doug groping Paulina Price (Jackee Harry) and he seemed remorseful. When she mentioned Julie Williams (Susan Seaforth Hayes) being locked in the freezer Doug assured Doc that it was no accident. He replied, “I enjoyed locking that bitch in the freezer.”

DOOL Spoilers – The Devil Reveals Himself

The voice became a bit deeper when Marlena was told, “I’m not Doug.” She seemed confused but was stunned when the demon said in a deep guttural tone that it had been 25 years, and asked if Dr. Evans did not think he would return for her? The first possession began around Halloween of 1995 and was supposed to end with a Christmas miracle but lasted until Easter of 1996. Spoilers have not revealed a timeline for this second go-round.

Kayla Johnson Mary Beth Evan) is running more tests at the request of Julie because Doug seemed to be displaying signs of dementia. Since he is already possessed it doesn’t look as if there will be an Alzheimer’s storyline. Spoilers tease that the demon will leave its current host and take residence in the intended victim.

Spoilers indicate that twists and turns are coming, and once Doug is free, his behavior should indicate whether he is dealing with other issues or not. Kudos to Days execs for keeping Bill Hayes (age 96) in front burner storylines rather than portraying him as a stereotypical senior character.