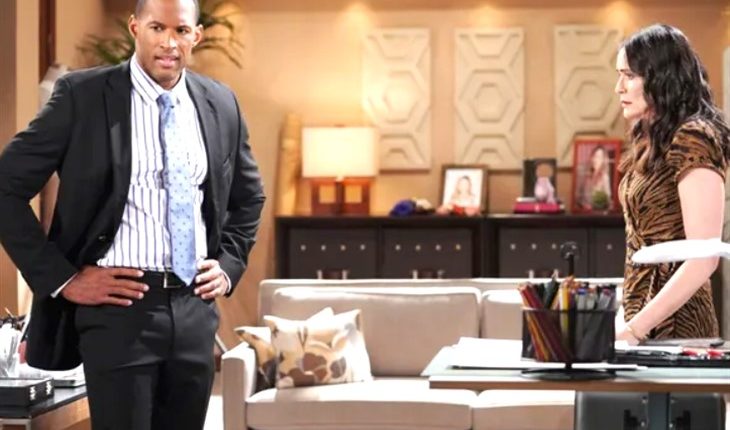 The Bold and the Beautiful (B&B) spoilers and updates tease Carter Walton (Lawrence Saint-Victor) has been given a stunning offer. Carter had been in a relationship with Zoe Buckingham (Kiara Barnes). Carter believed that he was going to have a future with Zoe but the relationship came to an end. Carter ended up having an affair with Quinn Forrester (Rena Sofer) who was having trouble with her marriage to Eric Forrester (John McCook). Quinn believed that Eric did not want to be with her anymore. Quinn did not know that Eric was struggling with a medical condition.

The Bold And The Beautiful (B&B) Spoilers: Logan Sisters Won’t Back Off – Donna Takes Quinn’s Place

Carter was willing to step aside so that Eric and Quinn could be together again. Carter thought that Eric and Quinn were happy but has found out that Eric is unable to make love to Quinn. Eric was devastated to find out that has erectile dysfunction. Eric does not want Quinn to be in a relationship without intimacy. Eric has asked Carter to be the one to fulfill Quinn’s sexual needs.

Carter was stunned to find out that Eric could not be with Quinn intimately. He was even more shocked when Eric told him that he wanted Carter to be the one to be with Quinn. Carter feels that it would be wrong to do what Eric wants him to do with Quinn even though he wants to be with Quinn again.

The Bold and the Beautiful Carter may find in the future that he will be able to stay loyal and give into his desires. Carter wants to both Eric and Quinn to be happy. Carter can see that Eric is struggling with his medical condition. He knows that Eric wants Quinn to be fulfilled in every way. Will Carter do what Eric has asked him to do for Quinn?

Carter knows that Quinn is determined to stay loyal to Eric but she may not be able to give up her need to be with a man. Carter loves Quinn and would want to be there for her in her time of need. Will Carter be able to resist Quinn if she wants to be with him? Be sure to catch up on everything happening with B&B right now. Come back here often for The Bold and the Beautiful spoilers, news, and updates.