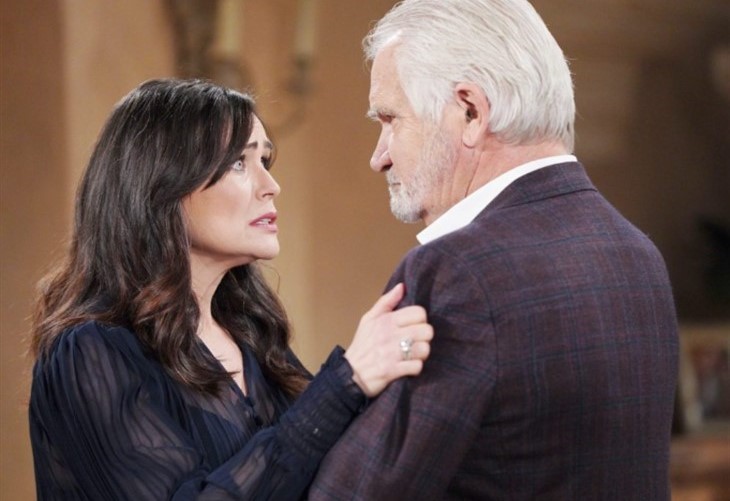 The Bold and the Beautiful (B&B) spoilers document that Eric Forrester (John McCook) is not relenting. He has concluded that Queric will endure if Quarter continues.

Quinn Fuller Forrester (Rena Sofer) was taken aback by Eric’s suggestion. It would be accurate to say that she was also offended.

Carter Walton (Lawrence Saint-Victor) is torn. He, like Quinn, feels terrible that Eric’s trust was betrayed. Now, because of Eric’s stunning decision, Carter is caught. He has fallen in love with Quinn but is uncertain what a future with her would be like.

Wyatt Spencer (Darin Brooks) does not know the full extent of his mother’s problems. He, like Ridge Forrester (Thorsten Kaye) and Brooke Logan Forrester (Katherine Kelly Lang), believes that Quinn and Carter are going behind Eric’s back.

The trio does not know what has happened in recent days. Eric’s realization, which could be classified as anywhere from selfless to fully misguided, is already creating unintended consequences. Quinn and Carter’s connection is tied to Eric’s endorsement.

Without knowing it, Wyatt supported Eric’s proposal when telling his mom that she had to do whatever McCook’s character wanted. That came after Wyatt, Quinn, and Carter heaped praise on Eric’s selfless nature.

It is not just that Eric developed what could be a purely physical problem that has impacted his marriage. He does not believe the issue is psychological. But that is and will remain a fair subject to re-explore in the future.

Has he developed a purely physical problem, or have his intensely mixed feelings about Quinn produced this effect? There is no way to know at this point in the plot if Eric’s subconscious is pushing Quinn away as his loved ones have once again been encouraging him to do.

Beyond current circumstances, Eric understands that he will depart the earth many years before Quinn. Mortality is a reasonable issue for him to consider, based on the age gap.

The Bold And The Beautiful Spoilers – A Sense Of Worthlessness Follows Selfless Choice?

Yes, Quinn has feelings for Carter that have not dissipated. But will Quinn be able to exist within a re-imagined Queric and whatever Quarter is becoming?

Eric is not thinking straight, though he is convinced otherwise. He can not project what dynamic will exist if the condoned Quarter persists.

The potential for both pairings to dissolve can not be discounted. Can Quinn psychologically handle being at the mansion and the apartment on the same day regularly? And will Eric’s selflessness lead to a sense of worthlessness as the fall unfolds?