Days Of Our Lives (DOOL) Spoilers: Xander And Justin Defend Gwen And Bonnie Against The Odds 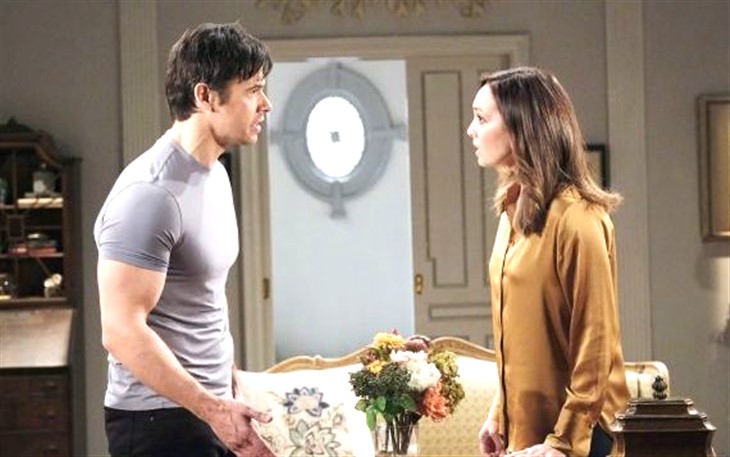 Days of our Lives (DOOL) spoilers and updates tease Justin Kiriakis (Wally Kurth) is determined to set the woman that he loves free. Justin was going to marry Bonnie Lockhart (Judi Evans) but she has gotten into trouble from the law. Justin does not know who he might be able to turn to in order to get help for Bonnie.

Justin may find an unlikely helper in his efforts from Xander Kiriakis (Paul Telfer). Xander wants to help Gwen Rizczech (Emily O’Brien) to be able to stay in her father Jack Deveraux’s (Matthew Ashford) life. Gwen could lose the love and acceptance that she has from Jack if he finds out about the secret that she is keeping.

Justin was not sure if he wanted to help Bonnie. Justin was shocked when he found out that Bonnie had killed her sister-in-law Calista Lockhart (Cady Huffman) and stole money from Xander. Bonnie was being blackmailed by Calista who wanted Bonnie to give her a million dollars or she would tell the authorities that Bonnie killed Calista’s husband Harrison Lord (Kevin Sizemore). Bonnie had been trying to keep the secret that she had to defend herself because Harrison was trying to have his way with her. Bonnie thought that Calista would be happy with the million dollars that she had stolen from Xander. Bonnie ended up killing Calista because Calista was going to kill Bonnie. Justin may turn to Xander to get him to not to press charges against Bonnie for stealing the money which could help him to defend Bonnie with the other charges against her.

Xander has gotten close to Gwen. Xander did not expect that he would want to help Gwen or get into a relationship with her. Gwen is keeping the secret that she had a miscarriage before she got into the fight with her sister Abigail Deveraux DiMera (Marci Miller) that caused her to want to leave Salem. Gwen was being blackmailed by Dr. Clay Snyder (Michael Lowry) who wanted Gwen to help him with his illegal drug operation. Xander knew that Gwen was in trouble with Snyder. He helped her when Dr. Snyder was trying to hurt her which resulted in Dr. Snyder dying of a heart attack. Gwen and Xander were able to get rid of Snyder’s body. However,

Jack found out that Gwen was involved with Snyder and Xander took the blame for Gwen to protect her from Jack finding out about her miscarriage. Xander was going to go to jail but EJ DiMera (Daniel Feuerriegel) helped Xander because he wanted to get the million dollars that Xander had from him. Xander had gotten the million dollars from EJ’s wife Sami Brady DiMera (Alison Sweeney) to expose the truth to Eric Brady (Greg Vaughan) that Xander and Eric’s wife Nicole Walker (Arianne Zucker) had an affair. EJ wants the money back because he is angry about Sami cheating on him with Lucas Horton (Bryan Dattilo). Xander need to get the million dollars back and could get Justin to help him get the money from the authorities.

Days of Our Lives (DOOL) Spoilers: Philip and Chloe’s New Start, But Brady’s Not Out Yet https://t.co/U9iGAUG4Dr #DaysofOurLives #DaytimeSoaps #Spoilers pic.twitter.com/8jAR2InGpx

Days of our Lives Xander wants to make sure that Gwen does not lose Jack and return the money to EJ. Xander does not have a close relationship with Justin but knows that Justin is an honorable man. Will Xander be able to get Justin to help him with his problems? Justin would not normally turn to Xander for help. However, Justin wants to keep Bonnie for going to jail for a crime that she did not commit. Can Justin trust Xander to help him to save Bonnie? Be sure to catch up on everything happening with DOOL right now. Come back here often for Days of Our Lives spoilers, news, and updates.