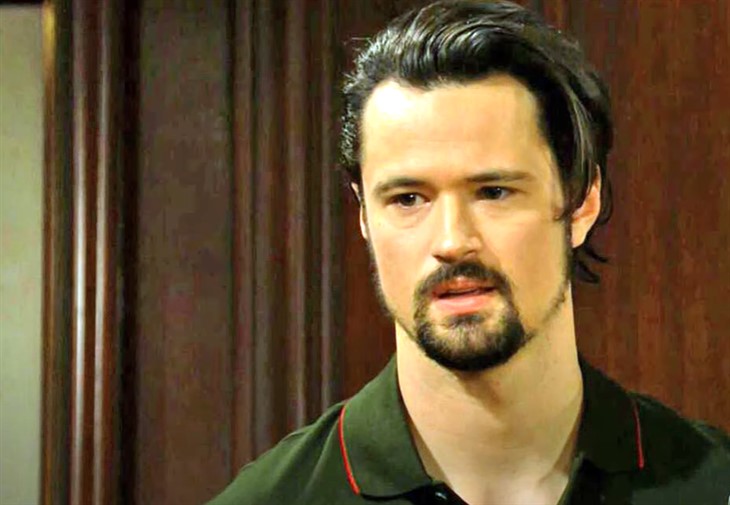 The Bold and the Beautiful (B&B) spoilers and updates tease Thomas Forrester (Matthew Atkinson) will need to get help. Thomas has been trying to put the past behind him. He lost his childhood friend Vincent Walker (Joe LoCicero) due to tragic circumstances. Vinny committed suicide in order to try to help Thomas to get Hope Spencer (Annika Noelle) away from her husband Liam Spencer (Scott Clifton).

Vinny hoped that he could set Liam up by stepping in front of Liam’s car and have him sent to jail for his death. Thomas found out the truth from a message from Vinny and helped to set Liam free. Hope was grateful to Thomas for helping to clear Liam’s name so that he could come back to her. Thomas needs Hope to help him to protect his family.

Thomas has had his trouble in the past with his son Douglas Forrester (Henry Joseph Samiri). However, Thomas was able to work out his problems because Hope helped him. Hope became Douglas’ adopted mother. Thomas and Douglas have a strong father and son relationship now. Thomas will want to make sure that Douglas does not get into danger.

Thomas and everyone who attended the wedding of Steffy Forrester (Jacqueline MacInnes Wood) and Dr. John Finnegan (Tanner Novlan) found out that Sheila Carter (Kimberlin Brown) was Finn’s biological mother. Thomas knows that Sheila is a dangerous woman who might put Douglas at risk. Thomas will need to get Hope to help him to keep Douglas safe

Thomas is worried about Steffy. He does not want Sheila to hurt his sister. He has worked hard to make sure that Steffy was able to find happiness with Finn. He helped to uncover the truth that Vinny had altered the paternity test that showed that Liam was the father of Steffy’s son Hayes Finnegan (Piper Harriot).

Hope and Steffy have had a long history of wanting to be the one in Liam’s life. Steffy thought that Liam was Hayes’ father because she had a one-night stand with Liam. He found out that Finn was really Hayes’ father and made sure that everyone knew the truth. Thomas wants Steffy and Finn to have a good life together. Thomas knows that Hope wants Steffy to be happy with Finn. Hope would want to help Thomas to support Steffy in her efforts to protect her family from Sheila.

The Bold and the Beautiful Thomas knows that he can trust Hope to help him. Hope helped Thomas when Justin Barber (Aaron D. Spears) took him hostage because Justin did not want Liam and his father Bill Spencer (Don Diamont) to get out of their legal troubles. Hope was able to help save Thomas and help him to get the information to the police that helped to set Liam and Bill free.

Thomas knows that Hope will want to help him to keep Douglas from getting into danger from Sheila. What can Hope and Thomas do to protect Douglas? Thomas will want Steffy to be happy and safe in her new life. Hope wants to support Steffy. What can Thomas and Hope do to help Steffy and her new family in their time of need? Be sure to catch up on everything happening with B&B right now. Come back here often for The Bold and the Beautiful spoilers, news, and updates.