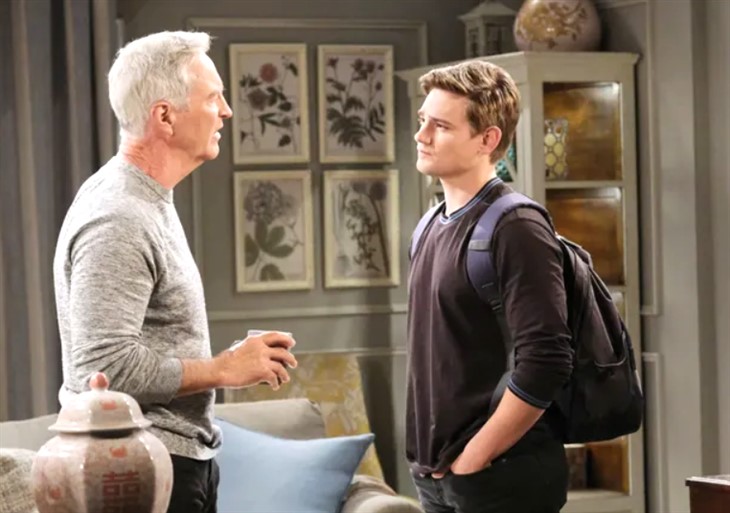 Days of our Lives (DOOL) spoilers and updates tease Johnny DiMera (Carson Boatman) has a dream project. He wants to become a filmmaker. He has come back to Salem to get support for his dream. He has been trying to get financial help from different people. Johnny has been able to get Roman Brady (Josh Taylor) and Lucas Horton (Byran Dattilo) to invest in his movie project.

Johnny had hoped that his father EJ DiMera (Daniel Feuerriegel) would invest in his movie but EJ has refused to help him. He is hoping that his grandmother Dr. Marlena Evans (Deidre Hall) will invest in the movie. Marlena wants to help Johnny but John Black (Drake Hogestyn) is concerned about Johnny making the movie.

Days Of Our Lives Spoilers: John Is Concerned About The Subject Matter Of The Movie

John is worried about the subject of the movie. Marlena suggested to Johnny that he try to get Will Horton (Chandler Massey) to let him use his script that he and Sami Brady DiMera (Alison Sweeney) wrote. The script is about Sami’s life story. John knows that the script dealt with his affair with Marlena. Sami and Marlena had trouble because of the affair. John is also concerned that the script covers the time that Marlena was possessed by the devil. John nearly lost Marlena during her time of possession. John does not want past events to be brought back into the light. John wants Johnny to realize his dream of being a filmmaker but does not want him to use the script that depicts Sami’s life.

EJ does not want Johnny to make movie. EJ wants Johnny to work with him at their family company DiMera Enterprises. EJ is not happy that Johnny is going to use the script about Sami because he and Sami have had a falling out with their relationship. Johnny wanted to get financial support for the movie from different members of his family. EJ convinced Tony DiMera (Thaao Penghlis) and his wife Anna DiMera (Leann Hunley) to turn down Johnny. EJ wants Chad DiMera (Billy Flynn) to try to convince Johnny to give up on his efforts to make the movie in order to work at DiMera Enterprises.

Days of our Lives EJ is determined to get Johnny to come to work with him at DiMera Enterprises. EJ can be a ruthless man. He may decide to do something drastic in order to keep Johnny from making his movie. What might EJ do to undermine Johnny’s efforts to become a filmmaker? John loves Johnny and wants him to find success as a filmmaker. John is worried that the past may come back to haunt Marlena and Sami.

John may try to find a way to convince Johnny to use a different script for the movie. Can John convince Johnny that he should use a different subject for the movie? John would not want to help EJ to prevent Johnny from making the movie but he may turn to EJ for help. Will John and EJ come together to stop Johnny from making the movie that might bring the past back to life? Be sure to catch up on everything happening with DOOL right now. Come back here often for Days of Our Lives spoilers, news, and updates.