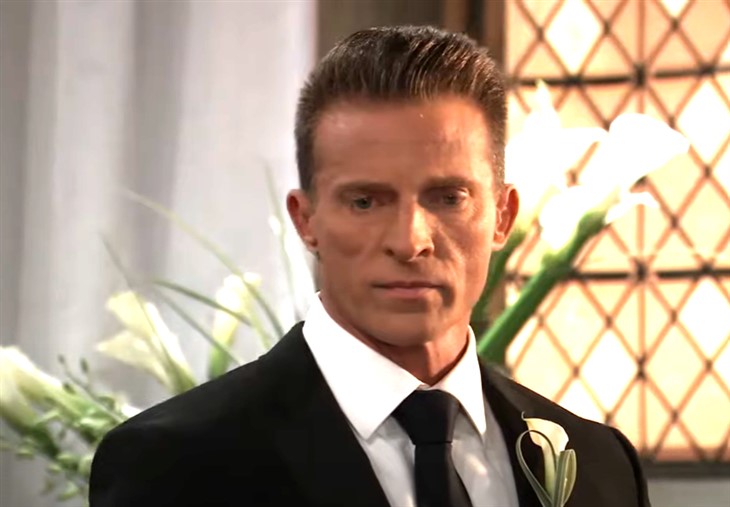 General Hospital spoilers and rumors tease that Jason Morgan (Steve Burton) will try to explain why he and Carly Corinthos (Laura Wright) got married, but Sonny Corinthos (Maurice Benard) isn’t buying it, in upcoming episodes of General Hospital!

General Hospital viewers will recall that as Sonny was waking up under a rafter that fell from the roof of the burning Tan-O, Carly and Jason were getting married back in Port Charles! Carly and Jason will have a lot of explaining to do when Sonny shows up!

General Hospital viewers will see that Sonny didn’t want to wait around healing at the clinic in Nixon Falls, Pennsylvania before heading back to Port Charles! Nina Reeves (Cynthia Watros) will try to stop him, but he just pushes her out of his way after tearing off his oxygen mask!

By the time he reaches the Corinthos compound and looks for Carly, she and Jason will be home from their wedding and reception and likely in bed! Sonny tore out of Nixon Falls so fast no one had time to forewarn him of the things that had changed while he was missing and presumed dead for nearly a year! To say that Sonny won’t be a happy camper may just be the understatement of the century, when he walks in on his wife and his best friend in bed together!

Whether Sonny actually catches Jason and Carly “in the act” remains to be seen, but Jason, the cooler head of the two, will likely be the one who tries to explain things to Sonny. Sonny will be in no mood for kisses, hugs, or greetings and salutations!

If Sonny had walked in on the wedding or possibly the reception, it may have been a different story, as General Hospital viewers will agree. Sonny just got his memories back and he would think that it would be way too soon for Carly to move on, and certainly not with Jason!

Jason will try to explain why he and Carly married – to begin with it was a business arrangement to protect Carly. Jason would have had to kill Carly if he didn’t marry her, he tries to explain to Sonny. But Sonny, not knowing the changes that have gone on since he’s been gone with the Five Families and Cyrus Renault’s (Jeff Kober) interference even from behind bars, thinks is sounds more like monkey business!

Longtime General Hospital viewers will remember that Carly and Jason were in love many, many years ago – before Michael Corinthos (Chad Duell) was born, and even before Sonny came to Port Charles. Carly and Jason have been getting some of their old feelings for each other back, even though Carly had admitted she still loved Sonny as well and had been having some mixed feelings prior to the wedding.

Sonny will be able to pick up on this fact, especially seeing Jason and Carly together. Possibly finding them in bed when he walks in wouldn’t help, but even if the marriage wasn’t yet consummated, Sonny may not find their body language around each other as corroborating what they are telling him. General Hospital viewers can expect that there will be confusion and hurt feelings all around, because Sonny may not even be calm enough to explain where he’s been all this time!