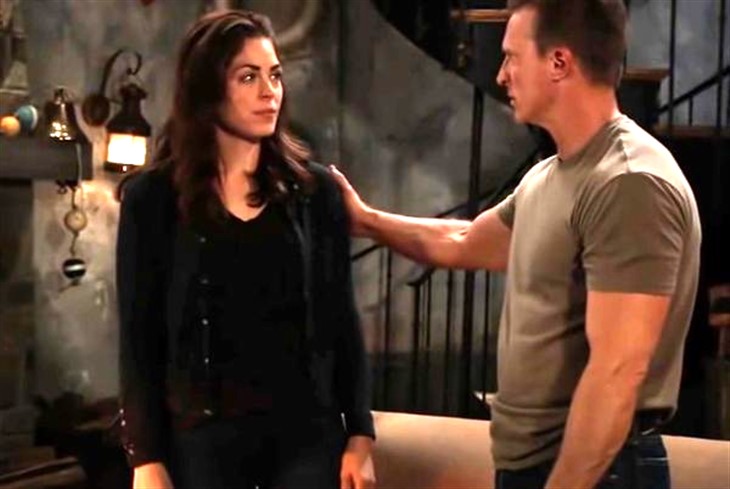 General Hospital (GH) spoilers tease that although Jason Morgan (Steve Burton) and Carly Corinthos (Laura Wright) just had a big splashy wedding, the return of Sonny Corinthos (Maurice Bernard) will end that relationship before it even begins. Although Jason and Carly do have feelings for each other, they both admitted that they haven’t quite fallen in love just yet. Jason will certainly step aside while Carly and Sonny sort everything out. He was beginning to have feelings for Dr. Britt Westbourne (Kelly Thiebaud) before the Carly situation came up, and he may be eager to resume that relationship. But the way he treated Britt, it may not be an easy task.

Although Britt may enlist Jason to help her locate her mother, Dr. Liesl Obrecht (Kathleen Gati), she not going to be in any hurry to take Jason back romantically. They were just beginning to start something romantic when Jason and Carly realized they needed to get married in order to keep Sonny’s business from falling pretty to the 5 families. Jason broke Britt’s heart when he told her about the engagement. She’s not going to want Jason to hurt her again. But Jason and Britt fell in love on an adventure together, so if he does go to help her find Liesl, all those feelings might just resurface.

GH Spoilers – Will A New Adventure Bring Jason Morgan And Dr. Britt Westbourne Back Together?

Liesl has been taken right out of her airplane by Victor Cassadine (Charles Shaughnessy). He still is love with his ex and has taken her hostage. Britt will know that something is wrong, and will likely want to help her mother. And she won’t be able to do that alone. Look for her to reach out to Jason for help. And since the mission is likely to be fraught with danger, that may remind both Jason and Britt of how they developed feelings for one another in the first place.

Britt has become a much better person since she returned to Port Charles, but she certainly isn’t perfect. She may throw the fact that she slept with Jasper “Jax” Jacks (Ingo Rademacher) in Jason’s face. Not to mention she will likely recount just how badly Jason hurt her. For his part, Jason had resigned himself to marrying Carly, but he will step aside to let Sonny and Carly work things out, if that’s even possible. So if his eyes turn to Britt once more, eventually Britt will give in. She still loves Jason, no matter how badly he hurt her.

Will Jason step aside while Carly and Sonny work things out? Will Jason once again turn his attention to Britt? Would she even be willing to take Jason back? Love is complicated in Port Charles, so stay tuned to General Hospital airing weekdays on ABC. And don’t forget to check back right here regularly for all your General Hospital news, information and spoilers!

Prev Next
15 Comments
Leave A Reply
Cancel Reply
For All The Alaskan Bush People News!