Days Of Our Lives (DOOL) Spoilers: Marlena Agrees To Possession To Save Doug 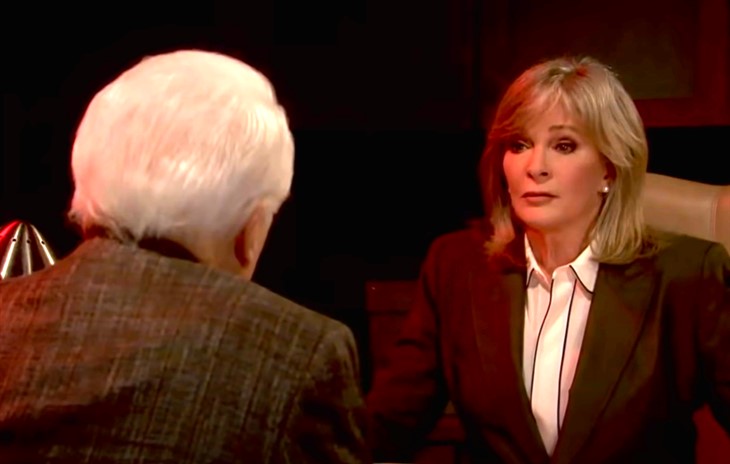 Days of Our Lives (DOOL) spoilers suggest that John Black (Drake Hogestyn) is about to learn that Marlena Evans (Deidre Hall) is possessed again. However, this time Marlena may have invited the devil in to save Doug Williams (Bill Hayes) from certain death. Can John save Marlena this time?

Days of Our Lives Doug ended up being a host for the demon that came back for Marlena twenty-five years after her possession. The demon had promised to come back but could not find anyone close enough to Marlena to use as a bridge to her. However, recently, Doug started to act completely out of character even locking his wife in a freezer. Julie Williams (Susan Seaforth Hayes) thought that her husband may be suffering from dementia. Unfortunately, Doug’s tests came back to show no significant problems, at least until he was alone with Marlena. Now, due to doctor-patient confidentiality, Marlena could not call for help. Can Doug be saved?

DOOL Spoilers – A Deal With The Devil

Days of Our Lives Doug was losing his battle with the devil as he tried to regain control of his body and thoughts. The demon inside him finally came out and revealed himself to Marlena before showing how badly he could hurt Doug. Marlena had no choice but to save Doug’s life. After all, how would she explain him dying in her office, his collapse was bad enough. The devil made it plain that he would kill Doug if Marlena didn’t invite him back into her life and body. What choice did Marlena have other than to save Doug’s life?

Days of Our Lives Spoilers  – John Black Has Reason To Worry

Days of Our Lives John was worried that Johnny’s movie would bring all of the possession memories back. John was also afraid that even worse things could happen and that is proving to be true. Marlena has returned home and is acting a little strange but will John notice in time to save her? Marlena has no way to ask John for help so he has to rely on his instincts and her behaviors for clues. The devil isn’t likely to let John notice anything until he is sure that Marlena cannot be saved. Unfortunately, John is the only one who could help Marlena that last time and that will be the case this time as well. Can Father John save the love of his life once again?

Days Of Our Lives Spoilers: Tony Provides Valuable Insight, But Will Johnny Heed The Warning?https://t.co/eKuJACMrBV

A lot has happened to John since the last time he had to battle the devil for Marlena. John is older and weaker in some ways. John’s body has been paralyzed since the last time as well. Does John have the strength to face this battle again? Could John fail and lose Marlena forever?