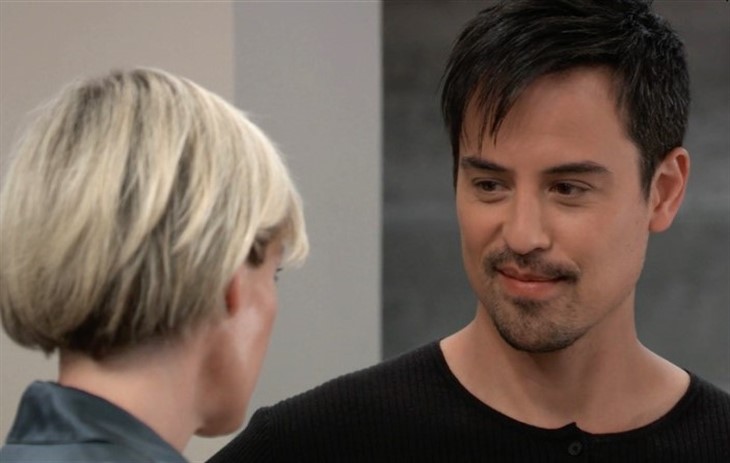 General Hospital (GH) spoilers tease that Ava Jerome (Maura West) is preparing to leave Port Charles behind. Her stalker, really Spencer Cassadine (Nicholas Chavez) and Esme Prince (Avery Kristen Pohl), have scared Ava into believing that they can get to her anywhere. And as long as she is anywhere Nikolas Cassadine (Marcus Coloma), they won’t let up. Esme recently set Ava’s car on fire, so Ava is well aware that her life could be in danger if she stays.

Ava still loves Nikolas and as long as they are in the same city, she could be in danger. Ava is slowly but surely tying up all the loose ends she has left in Port Charles. She asked Carly Corinthos (Laura Wright) to watch over the daughter Ava shares with Sonny Corinthos (Maurice Bernard). She has closed or is about to close up her art gallery. And next she will meet with Kristina Davis-Corinthos (Lexi Ainsworth) to ask the young woman to run Charlie’s Pub in her absence. It’s obvious Ava is hesitating because she really doesn’t want to leave or else she would have dropped her daughter off with Carly and left town, leaving the rest of it to be done over the phone.

Ava will certainly see Nikolas one last time before she goes. First and foremost, she will want to say goodbye to the man she loves. But also, because Nikolas is so persistent, she will likely once again plead for Nikolas to let her go. Nikolas has been fighting Ava tooth and nail, trying to come up with a way that they can stay together. But Ava isn’t having it, so this will likely also serve as a final warning not to try to follow her. But will Nikolas agree to Ava’s demands?

Nikolas believes that he can keep the stalker from harming Ava. But the fire is proof that Nikolas can’t be everywhere at once. And short of following Ava anywhere she goes, he won’t be able to protect her if the stalker wants to get to her. Neither of them would want that, so Nikolas will have to accept that for now, Ava is doing the right things for not only her own safety, but everyone else’s too.

Will Ava really leave Port Charles? Or can Nikolas convince her to stay? Will the stalker strike again? Anything can happen in Port Charles, so stay tuned to General Hospital airing weekdays on ABC. And don’t forget to check back right here regularly for all your General Hospital news, information and spoilers!