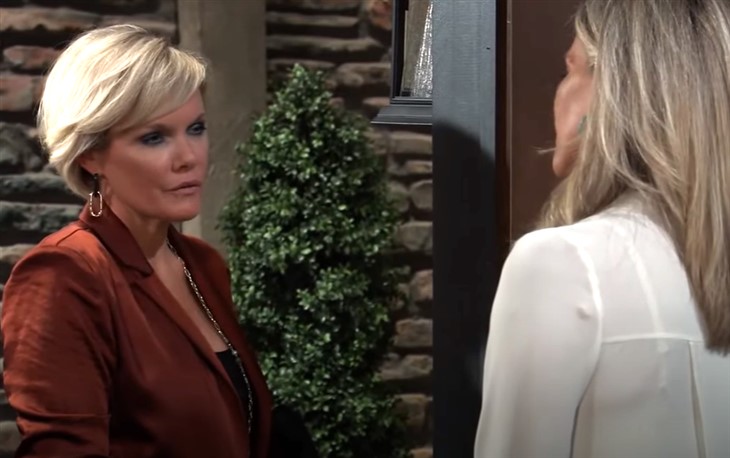 General Hospital (GH) spoilers indicate that the writers want fans to believe that Carly Corinthos (Laura Wright) and Ava Jerome (Maura West) have morphed into besties after years of turmoil. The Carly and Ava sudden shift in dynamics just doesn’t work, here’s why.

General Hospital’s Ava changed Morgan Corinthos’ (ex-Bryan Craig) bipolar medication for a placebo to keep him away from her daughter, Kiki Jerome (ex-Hayley Erin). Ava’s actions caused Morgan to go into a manic episode that lead to him stealing Julian Jerome’s (ex-William DeVry) car that had a bomb planted in it. Morgan was killed because he was in that car. Both Carly and Sonny Corinthos (Maurice Benard) have blamed Ava for years for Morgan’s death and it has been a huge problem between them.

Sonny nor Carly have wanted to talk to Ava about anything, including Avery Corinthos (Ava and Grace Scarola). Now, suddenly, Carly and Ava are friends since Sonny is not in the middle, the two women get along famously. This relationship is hard to convince fans is real because of their history.

GH Spoilers – Was Sonny Corinthos The Catalyst Of Arguments?

General Hospital’s Carly and Ava working together against the mob to protect Avery is plausible. However, their deeper connection, sharing custody of Avery when they have fought over her for years is too much to believe. Avery considered Carly her mother for years because Ava had nothing to do with her. Ava was cut out of Avery’s life because of past crimes. Ava has always been jealous of Carly and Avery’s bond and would never leave her with Carly not matter what the circumstance. This friendship is too far-fetched to believe.

General Hospital’s Carly and Ava joined forces out of necessity however, when Sonny returns, things are likely to change. Sonny still holds a grudge against Ava over what happened to Morgan. Ava also made fun of Sonny when he was paralyzed as well. Ava and Sonny have fought over their daughter for years. Sonny and Ava have a sorted past that he is not likely to forget no matter what changes Carly has made. Will Sonny see that Ava has helped Carly hold onto his territory? Will Sonny assume that Ava is working an angle as always? Will Sonny even want anything to do with his old life after he returns to Port Charles?

The lovefest that these writers are trying to spin between some characters is completely out of character. There is no possible way that Carly and Ava would ever rely on each other for anything. When will the out-of-character writing stop?