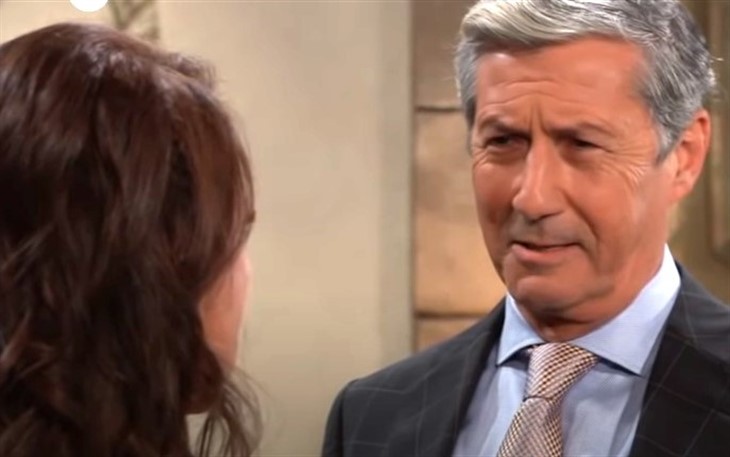 Liesl also gave baby Nathan, birth name James, to her late sister Madeline Reeves (Donna Mills) to raise out of protection. But more recently, Liesl’s protectiveness is over her grandson James West (Owen and Curtis Rufca) and her daughter Britt Westbourne (Kelly Thiebaud). Liesl was very tired of being held captive, even though it was in a nicely appointed suite where she had everything she needed – except her freedom! Liesl saved a knife from a meal brought into her in the suite and held it to Victor’s neck, threatening to kill him if she wasn’t set free!

General Hospital viewers will recall that Drew Cain (Cameron Mathison) found out there was another female prisoner where he is being held, besides Nurse Chloe Jennings (Phoebe Kuhlman) who was helping him. General Hospital viewers will recall that a woman was heard screaming, and he was told by a guard that the female prisoner’s “accommodations were reduced”.

It is possible that this was Holly Sutton, (Emma Samms) who was also in a very nice suite previously; although she too screamed that she wanted out! It seems that Victor Cassadine is no gentleman – if a woman becomes too much of a problem, their favor and advantage with him is taken away quickly. Even though Victor claims to love Liesl, it is more an issue of control than love – obsession and love are not the same thing, as General Hospital viewers know!

General Hospital Spoilers – Liesl Obrecht Is Put In The Dungeon

General Hospital viewers can figure that either the prison facility where Drew is being held is a separate building on Cassadine Island in Greece, or it could be a dungeon that has been constructed below the compound. Longtime General Hospital viewers will recall that there are tunnels below the compound; the last time Lulu Spencer (at that time Julie Marie Berman) was kidnapped by Stavros Cassadine (Robert Kelker-Kelly) Stavros was pushed down a hole which obviously ended in the tunnels – at a later trip there Lulu saw a body that she thought was her father Luke Spencer (Anthony Geary) there!

Since Valentin Cassadine (James Patrick Stuart) left Cassadine Island, Victor more than likely took it over, and the tunnels may have been converted into a dungeon below the compound! This is where Liesl winds up, just like the other female who was screaming! General Hospital viewers will see that Liesl will team up with a new ally – and an unexpected one. Perhaps together they can complete an escape!