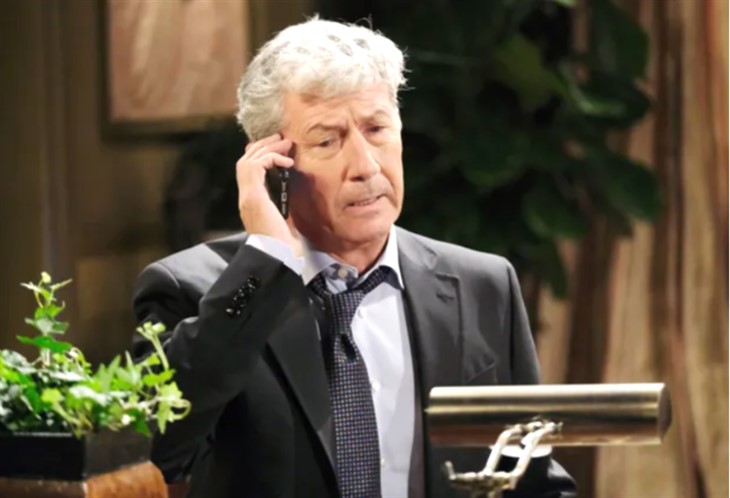 General Hospital spoilers suggest that Victor Cassadine (Charles Shaughnessy) will realize that Esme Prince (Avery Kristen Pohl) is missing. Victor knows that Nikolas Cassadine (Marcus Coloma) slept with Esme and could believe that he made her disappear. Will Victor get the answers he wants from Nikolas? Does Victor suspect Nikolas of doing something to Esme?

General Hospital spoilers reveal that Nikolas was desperate to get rid of Esme. Victor may have assumed that he can do damage control for Nikolas. Of course, Victor wants Nikolas in his debt so he has something to hold over his head. Little does Victor know that Ava Jerome (Maura West) is the culprit.

Victor wants leverage over someone. Victor wants a way to make his family go along with his plans. Victor needs to get a hold over Nikolas like he has Valentin Cassadine (James Patrick Stuart). After all, Victor has put Valentin’s child in a boarding school where he cannot even sign her out.

Victor has been fascinated by Ava since the day they met. Nikolas may have very well noticed that. However, Victor seems to have his eye on Ava and that could cause major problems. Nikolas wants to hold onto his wife and Victor is trying to come between them. Will Victor manage to get enough leverage to force Ava into his bed?

Ava could turn to Sonny Corinthos (Maurice Benard) for help. After all, Ava has already turned to Sonny about Trina Robinson (Tabyana Ali). Would Ava ask Sonny to cover Esme’s fall as well? Would Sonny help Ava if she asked him to make this go away?

Victor isn’t about to leave a loose end like this floating around. Esme needs to be stopped if she is still alive. However, if Victor wants to come between Nikolas and Ava, he will certainly try to find Esme. Victor also knows about Esme and Nikolas’ little tryst. Will Victor search for Esme just in case she is pregnant by Nikolas?

Victor could keep Esme hidden until the perfect time to have her arrive very pregnant. Victor isn’t worried about saving Trina so he wouldn’t rush to get Esme back to testify. Instead, Victor could be happier bringing in Esme when she could do the most damage. Will Victor use Esme to take Ava from Nicolas?

Victor is not only evil but he is underhanded as well. It doesn’t matter to Victor that Ava is married to his nephew or anything else. Will Victor make a play for his nephew’s wife?