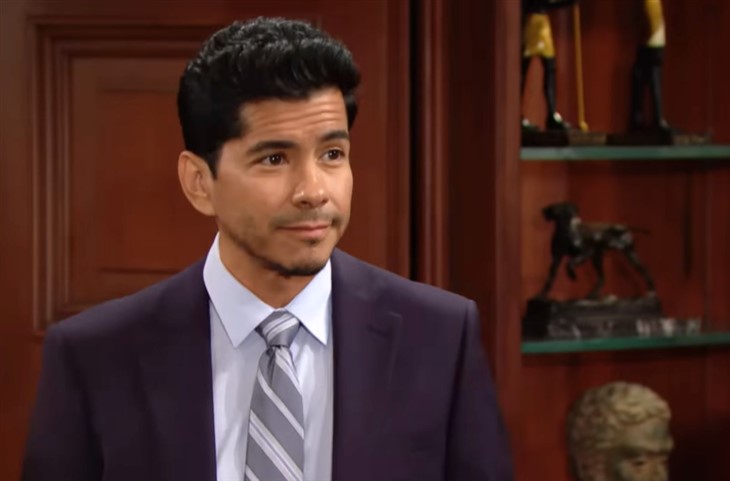 The Bold and the Beautiful spoilers document that Detective Alex Sanchez (Jeremy Ray Valdez) is teased to claim that Sheila Carter (Kimberlin Brown) is dead. But a lack of proof instantly causes her enemies and all seasoned soap opera fans to have rightful doubt.

If B&B would ever kill off Sheila, it would have to be in spectacular fashion. Irrefutable proof, including multiple eyewitnesses, would also need to be written into what would be a monumental moment and the end of a three-decade-plus run across two soaps, including her original home, The Young and the Restless.

The Bold And The Beautiful Spoilers – Sheila Carter Intends Closure?

Would Sheila make it look like she has died to preserve her fugitive status? Of course, and she has taken those steps in the past.

It is possible, in this specific instance, that Sheila wants to give John Finn Finnegan (Tanner Novlan) peace of mind. He told his birth mother that she has no place in his life and that she would never see Hayes Forrester Finnegan (Piper Harriet) again.

Sheila was forlorn when he last saw her. Bill Spencer (Don Diamont) had her bound in the hospital bed where she held Finn hostage. But Brown’s character escapes via Mike Guthrie’s (Ken Hanes) assistance.

Deacon Sharpe (Sean Kanan) was not thinking straight when he allowed Sheila to remain in his apartment. He did so because of being angry and disillusioned.

There is no doubt that Sheila used Deacon. Her arrival at his new living space put the parolee in a dangerous legal position. Deacon talked Deputy Chief Bradley Baker (Dan Martin) out of believing that Sheila was in the apartment that is part of the Il Giardino property.

Leaving Sheila by herself, when Deacon headed to the Logan mansion, was foolish. Shame on him for not putting justice above his self-interest.

The Bold And The Beautiful Spoilers – Leaving California For Wisconsin?

Some buzz in the recent past indicated that a return to Genoa City, Wisconsin, might be possible when Sheila was finished in Los Angeles, California. Why a known fugitive would return to a city where she is even more notorious is questionable.

However, TPTB at B&B and Y&R could be in the process of having Sheila revive her legendary arc in GC. Lauren Fenmore Baldwin (Tracey Bregman) has the arguable grudge-edge over Finn and the Forrester’s and other victims.

Sheila (as then played in a dual role by Michelle Stafford) was believed to have been killed years ago on Y&R. Sheila (as played by Brown on B&B) denied what she called rumors in her 2017-18 reappearance in LA.

Assuming another Sheila fake out, followed by either an eventual B&B return or what would be a momentous Y&R comeback, is reasonable until hard evidence is presented. And even then, how could anyone believe this diabolical icon would be dead?