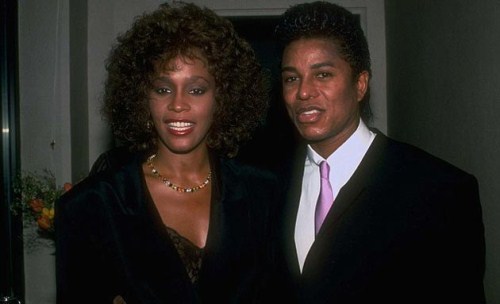 It seems that almost every hot female singer of the 80’s and 90’s slept with a Jackson brother – and Whitney Houston is no exception. Whitney Houston reportedly had a year-long affair with Jermaine Jackson.

Whitney became close to Michael Jackson’s brother when he was brought into to work with her early in her career in the mid-1980s, and although he has previously claimed they had strong feelings for each other in an autobiography, it is now believed they were “lovers.”

A source told the Sun on Sunday newspaper: “Jermaine didn’t tell even half the story in the book. He made it sound like they flirted and backed away. But they were lovers. In those early days with Whitney, he was smuggled into her hotel rooms, they worked extra late in the studio and she even had a codename for him. She referred to him as ‘Jai’.”

However, the romance fizzled out when he refused to leave his then-wife Hazel Gordy. The friend added: “The reason it ended was because Jermaine wouldn’t leave his wife, and Whitney was angry. The video for ‘Saving All My Love For You’ was about all of that.”

Do you think that Whitney was right to sleep with a married man? Does that question even mean anything in Hollywood? Let us know what you think in the comments below.