‘He Is Not The Love Of Her Life’, Insider Explains On Jennifer Lopez And Casper Smart Relationship 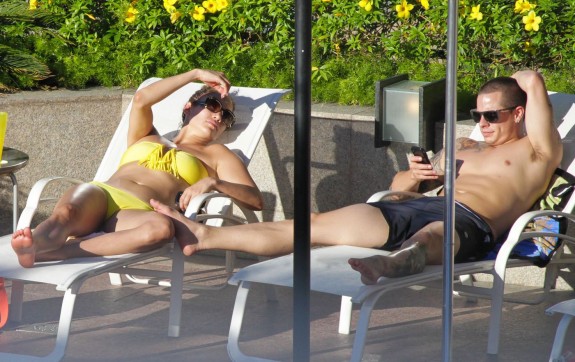 There’s definitely trouble in paradise and Jennifer Lopez is fuming. Last week, it was reported that her boyfriend Casper Smart made a stop at a gay sex club with photo evidence as photographers had been following Smart throughout the day. Lopez’s first reaction to the allegations was that she was going to threaten legal action over the untrue reports, but now it has become more than that.

Close sources to the couple have said that Jennifer is losing it – she is furious about this, mainly for the fact that she’s in the public eye and Casper isn’t as careful with the things he does as she is. Even if he went into the club by accident, paparazzi would have gotten their money shot and sent it out to all the media outlets, which could damage J-Lo’s reputation with the people she’s in relationships with.

“She is taking some time to think about things. They are still together. But the photos have shaken her up,” the insider told E!. “They have not split yet, but it’s fair to say they are cooling off a bit. The pictures have created a distance between them. Even if Casper is telling the truth, and he didn’t mean to walk into the doorway, it just proves how young and immature he is. He should have been more careful, he knows he is often being followed by paparazzi.

“Jennifer cares about Casper, they are certainly very close. But he is not the love of her life. She can live without him. If she does decide to split from him she’ll be okay. She just needs some time to think about whether Casper is worth all this trouble.”