Kristen Stewart Admits Her Relationship Is Over With Robert Pattinson 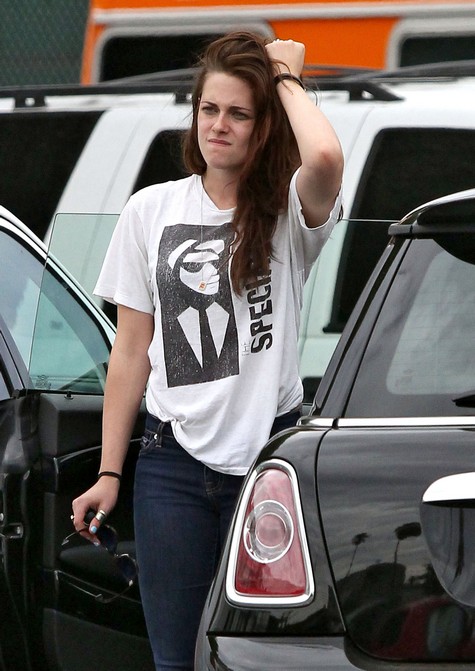 Kristen Stewart may chill her guilty feelings for a while, because Robert Pattinson’s interview on The Daily Show with Jon Stewart was tamer than a kitten on catnip. In true British gentlemanly fashion, Pattinson did not wash his past dirty laundry on a show watched by millions.

An insider told RadarOnline exclusively, “Just like his devout fans, Kristen tuned into Robert’s interview with Jon Stewart with drawn breath, but after seeing him deflect the questions about her, Kristen’s anxiety soon disappeared and instead she was filled with regret. While she was obviously relieved that Robert didn’t trash her, the realization that their relationship was finally over hit her hard.” You dumb cow. Regret always comes when one least expects it and we are insanely glad that Pattinson didn’t scandalize the situation further by being a trashy buffoon, but instead showed Kristen due respect. Sad that you lost him, aren’t you Kristen?

The source continues, “Kristen was praying that after the dust settled she would get another chance and she was clinging on to that hope. But she knows now that it’s not to be. Instead, she’s believes that they can now work on a friendship and is desperate to apologize to Robert in person for her affair with Rupert.”

We’re sorry, but we might be missing the red herring in this little tale of neo-noir feel-sorry-for-the-cheater saga. Does Stewart have any idea what she has done? Did she even for one moment think about how her actions would influence her future with Pattinson and her career? It is too late you crying freak! Get on with your life and let Pattinson be in his wallowing sorrow – at least he can’t be accused of being trashy – unlike certain people we know (cough).

“She doesn’t want to lose Robert completely in her life and would love to count on him as one of her closest friends. After all, they both achieved worldwide fame together because of the Twilight films and that’s something the pair will always share. While their relationship might have been tainted, they could still be the best of friends one day,” says the insider source.

Jon Stewart probed Pattinson like an emotionally abusive alien, but Pattinson deflected the questions and instead, chose to focus on the promotional marketing of his upcoming film Cosmopolis. A source tells about the anger and struggle Pattinson faced after the cheating scandal broke, “Rob was super angry for the first couple of weeks. Angry at Kristen for ruining what they had, angry at her for the public embarrassment. But he’s starting to wind down and really think about what he’s going to do regarding his relationship with Kristen. He goes back and forth.” Take your time Rob, Kristen’s career life is going nowhere slowly right now. Who knows if she might end up back in the arms of another adulterer?

Let us know in the comments below what you think of Kristen’s guilty feelings.