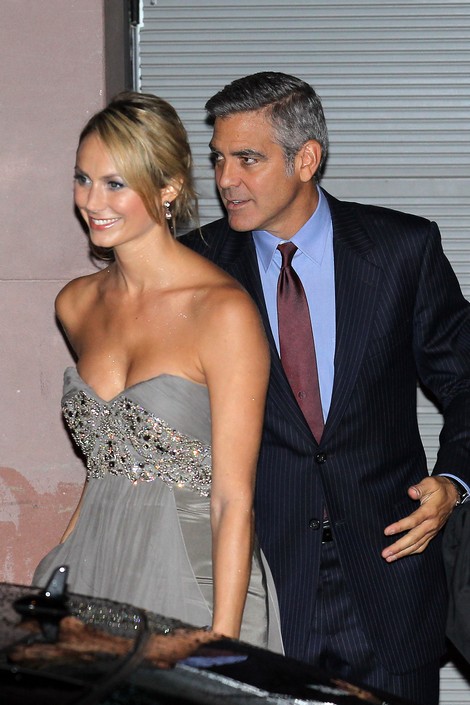 Despite the non-engagement ring George Clooney gave his girlfriend Stacy Keibler last month, it seems that their love couldn’t last! George, who is pushing 52, and Stacy, who is only 32, have had an imperfect relationship from the start. Despite their long-term time together, George never invited her to any of his public events! Stacy’s friend reported, “She said George wants to be on his own again and has no intention of getting married.”

Obviously! America’s most famous bachelor can’t ever tie the knot. It would kill his film career if women knew that the meat is off the market! However, all the signs were in place for a long-term commitment.

Exhibit A: The ring. A few weeks ago, Celeb Dirty Laundry reported that George presented Stacy with a gold ring. Her friends reported that she was thrilled. It was supposed to be evidence that George had some feelings for her that were located outside of his trousers.

Exhibit B: The parents. Last month, George flew out both of their parents to Cernobbio, Italy. The group stayed at George’s villa, toured together, and even got ice cream together. Having the families mingle on an extended Italian vacation almost screams secret elopement. We were happy to interpret it as a step towards marriage.

No word yet on who George will date next, but I’m guessing it will be someone young enough to be his daughter, with enough job freedom to be at his beck and call (except when he has acting/political business. Then she’ll be cruelly shunned like all the others before her!). No word yet from either rep, but what can Team George say? He’s still womanizing and has no plans to stop?

Watch out ladies! He’s on the hunt!