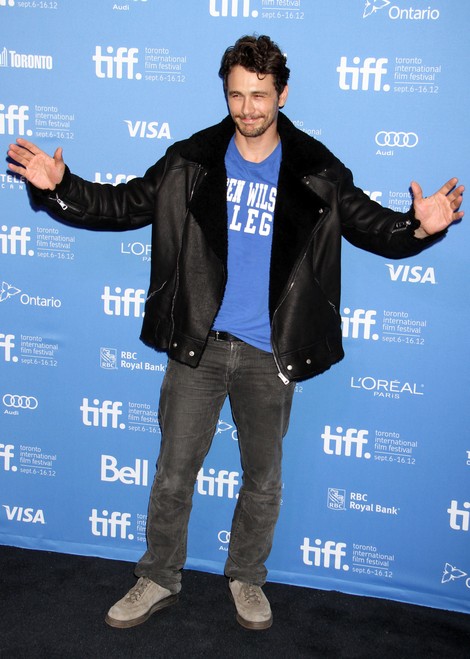 While in Canada for the Toronto International Film Festival, Kristen Stewart tried to make her post-cheating comeback and win back fans. She was greeted by posters held by fans, and all seemed to be going well! Well, it sounds like things were going better for Kristen than we could have ever guessed! New reports promise that Kristen was seen on a date with Oscar nominee James Franco, who wrote an essay about her called “Kristen Stewart the Queen.”

The lovebirds were caught flirting, and a witness reports that James was “gushing over her, saying what a great actress he thinks she is and was full of praise for her new movie, On the Road.” But Kristen is too heartbroken over Robert Pattinson/ Rupert Sanders to respond to any potential suitors, right? Wrong! The source continues, “She seemed at ease in his company, and he was certainly making her laugh. She was wearing a huge grin on her face.”

It sounds like Kristen has no hesitations about moving on, and James obviously isn’t put off by her rocky romantic history as a cheater! The new couple went out to dinner in Toronto. We thought that Kristen was moving on, but lo and behold, she was filmed arriving at the airport the next day wearing Robert’s Baltimore Orioles baseball cap on! That has got to mean something, right? Surely she wouldn’t be wearing Robert’s old clothes if she didn’t hold any love for him still. But maybe she just wanted to look low key and confuse the world with mixed signals? What do you think? We’ll have to watch and see if James and Kristen go on a second date!