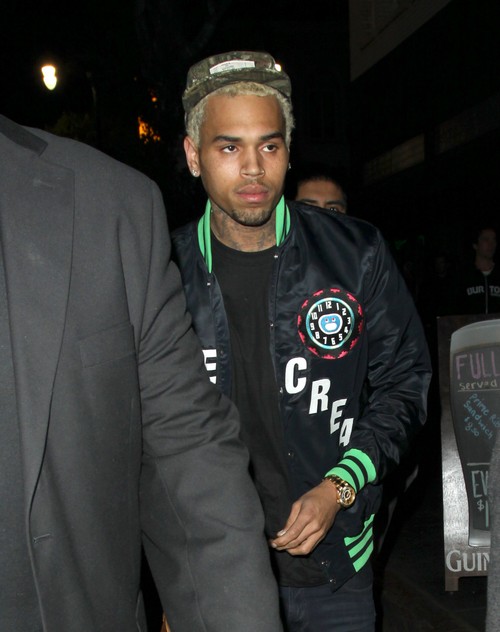 Chris Brown has deleted his Instagram account after posting a very controversial picture of Jesus on his page. The R&B singer who fought with Frank Ocean on Sunday evening, received a lot of negative comments from the picture he uploaded when he wrote: “Painting the way I feel today. Focus on what matters!,” referring to the incident between him and Frank earlier this week. People weren’t happy that he was using Jesus’ death on the cross to describe the way he’s feeling, and neither were we! Why would you do that?!

It didn’t take long for the woman beater to realize he was offending people by what he said. It wasn’t the image that was pissing people off, it was the caption that he left at the bottom of the image which sparked controversy as to why he would say such a stupid thing. Either he’s only doing it because he wants people to feel sorry for him (but clearly backfired), or he’s gearing up to release another album and wants people to care about him music projects.

Umm Chris, no one is checking for your music these days! Just stop… stop with everything.. the whole love triangle, the crap music you’re bringing out and the constant fights you are starting. First it’s Drake and now it’s Frank, and you tend to blame both of them for starting the fight. LOLz. His Instagram account ‘f**kyopictures was removed and currently says “Page Not Found,” hinting that the negative comments were definitely getting to him.

Before his account went down, he had posted another picture with said the following: “Social media takes away the essence of why we are even special or icons. So with that, I’m detaching myself from that world.” Who actually feels sorry for this kid? He needs to have a seat in the corner and just shut his mouth. Team Rihanna, Team Drake, Team Frank Ocean for life! Ha!