Adam Levine and Shakira Having Hot Sessions Together 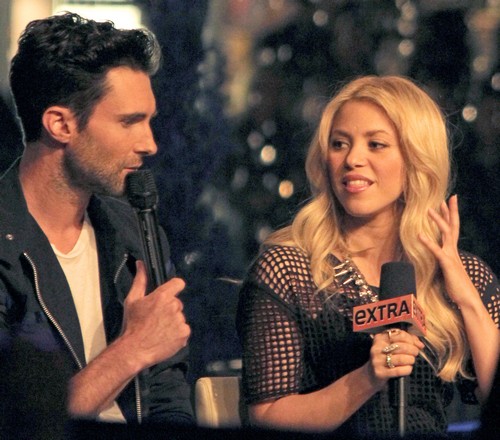 Put a hot guy like Adam Levine together with Shakira and stuff is bound to happen, right?  Rumor has it the two have been meeting up at Adam’s house for some steamy hot sessions – Yoga sessions that is.  Shakira had her first child a few months back and Adam has encouraged her to use Bikram Yoga sessions to get off the rest of the baby weight and to get herself back into fighting form and Shaki loved the idea.

According to the May 27th print edition of National Enquirer, Shakira’s soccer star boyfriend, Gerard Pique is not so happy about the new friendship that has blossomed. In fact he has decided to claim his territory whenever possible. In recent weeks whenever Gerard realizes that a camera is on them he has seized the moment to plant a kiss on Shakira. He’s trying to send a clear cut message to Adam and guys like him- hands off- Shaki is taken.

As for The Voice judges, they insist they are nothing more than friends. Adam is between girlfriends and although Shaki is absolutely stunning, she’s really not his type. Adam goes for pin thin, super tall models while Shakira is short, curvy and very blonde. She may not be his type but you have to admit, Adam and Shaki would make a really hot couple!

Do you believe that all that time spent together off the set is really about Yoga? Could it be a cover story for these two to work out some of that chemistry that we’ve seen between them on television? Is Shaki devoted to her new little family? Tell us your thoughts in the comments below!