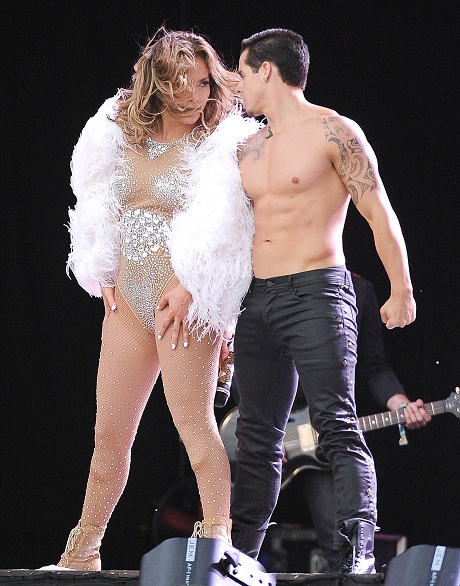 I think it’s pretty fair to say that this past week has probably been of the worst that Jennifer Lopez has had in a really long time. She had been gearing up for a big performance in The Bronx- basically Jen went back to her old stomping ground and received a chilly reception at best. The venue was half full and her messy split from Casper Smart was the only real topic for discussion. Her boy toy was rumored to be sexting with transsexual models and it’s not the first time in their 3 year romance that Casper was connected to some questionable sexual behavior. Jen pulled the plug on the romance but by the end of the week she was emotionally depleted.

On Sunday Jen pulled out of her scheduled appearance later this year for The World Cup in Brazil. Jen originally recorded a song, “We Are One” with Pitbull and Claudia Leitte especially for the opening ceremony but she now has no intention of being there to perform it live. Sources close to the starlet say that she can’t handle another disappointment right now and she suspects that even if she shows up in Brazil all of the negativity will follow her and ruin this experience too.

Jen and her handlers’ believed that canceling her participation in the opening ceremony was the best way to stop the drama and it’ll give her a chance to regroup and come back stronger. The World Cup is a huge event, do you guys think that Jen should honor her commitment to it? Should she allow her personal life to affect a once-in-a-lifetime opportunity like this? Tell us your thoughts in the comments below!