Days Of Our Lives (DOOL) Spoilers: Sarah Fears For Her Life, Wonders How Far Kristen Will Go 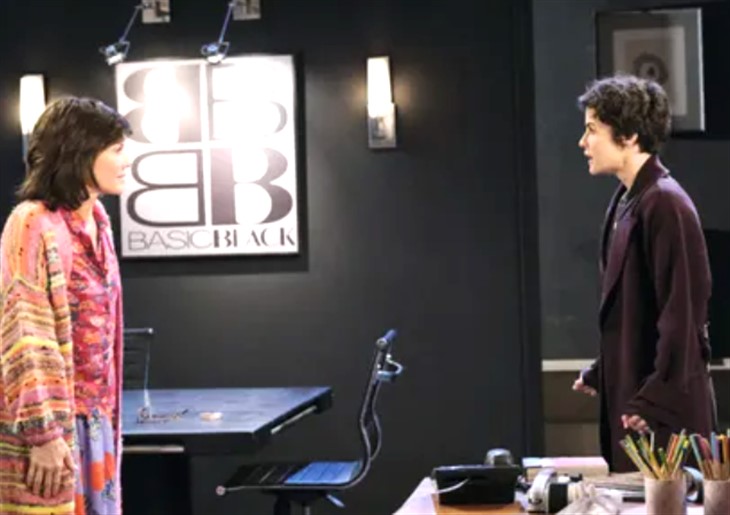 Days of Our Lives (DOOL) spoilers tease that Sarah Horton (Linsey Godfrey) will fear for her life as she wonders how far Kristen DiMera (Stacy Haiduk) will go in an upcoming episode of Days of Our Lives!

Days of Our Lives viewers will remember that earlier, Sarah had discovered Kristen DiMera was Kristen DiMera, not Susan Banks! Unfortunately, Kristen was caught like a rat in a trap since she would not have been able to come up with any kind of believable cover story! It would make no sense at all to tell Sarah that she was Susan impersonating Kristen to keep Chloe Lane (Nadia Bjorlin) away from Brady Black, (Eric Martsolf), which is the truth as far as why Kristen is impersonating Susan.

Brady knows Kristen is in prison, or at least, she is supposed to be! Kristen then had to take desperate measures to make sure that Sarah couldn’t tell anyone, and so she kidnapped her and stashed her somewhere. The DiMera wine cellar was not available since Abigail DiMera (Marci Miller) stashed Gwen Rizchech (Emily O’Brien) in it, so she had to do something! Of course, Kristen is only making it worse for herself by kidnapping Sarah – that would be another charge she would have to answer for and her prison sentence could be extended!

Days Of Our Lives (DOOL) Spoilers: Is Allie Finally Moving Past All The Drama In Her Life?

Not only will Xander Kiriakis (Paul Telfer) be hot on the trail looking for Sarah when she doesn’t show up at their wedding, so will Rex Brady (Kyle Lowder) who has suddenly shown up in Salem only to mess up Xander’s two-man bachelor party that only Jack Deveraux (Matthew Ashford) had shown up at! The only saving grace there might be for Kristen is if Xander thinks that Rex made her disappear because he was trying to “save” his ex-wife from making “a terrible mistake”!

Sarah knows that a desperate Kristen is a dangerous Kristen, she knows it all too well from what happened when she thought it was her baby girl who died when it was really Sarah’s. Kristen went off the rails totally, and rushed out of Salem University Hospital in a frenzy, pushing Nurse Haley Chen (Thia Megia) to her death down a flight of stairs, although it wasn’t intentional. Kristen was in such a state that she wasn’t completely aware of what she was doing! Sarah begins to fear for her life, considering that Kristen has no “out” here; she already tried to gain her trust but Kristen wouldn’t believe that Sarah wouldn’t tell at least Brady.

Kristen and Xander once worked together, but they no longer trust one another because each of them has turned the other into the authorities in the past to save their own hides. Sarah knows that Xander would definitely have Kristen’s hide for kidnapping her, and Kristen knows it so there is nothing Sarah can do from that standpoint. Sarah is very afraid that Kristen once more will go off the deep end and kill her if she cannot figure out a way to either gain her trust so she’ll let her go, or find some other way to free herself! At least that way she could contact Kristen’s brothers to deal with her!