Days Of Our Lives (DOOL) Spoilers: Nicole Is Heartbroken But Not Ready To Give Up On Love 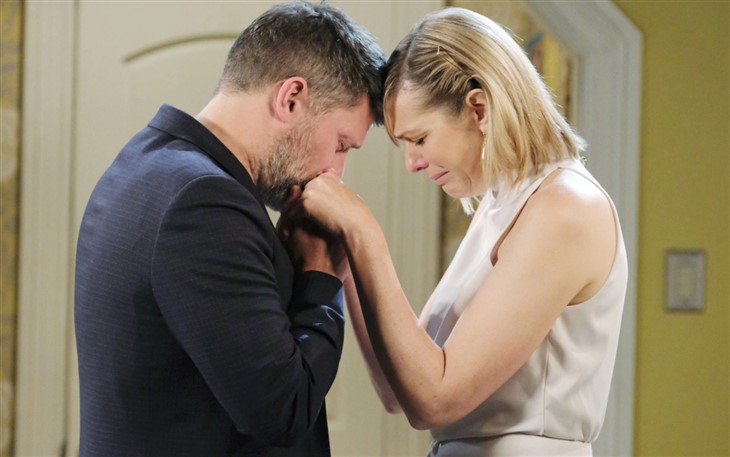 Days of our Lives (DOOL) spoilers and updates tease Nicole Walker Brady (Arianne Zucker) is going to be single again. Nicole had been married to Eric Brady (Greg Vaughan). Eric went out of the country to do charity work in Africa. He returned home to celebrate his anniversary with Nicole.

They arranged to have a party to celebrate with family and friends. However, the celebration came to an end when Xander Kiriakis (Paul Telfer) came to the party. Xander told Eric that he and Nicole had a one-night stand when Eric was in Africa. Eric was devastated to find out that Nicole had been with Xander. Nicole tried to get Eric to stay but he decided to go back to Africa. Nicole is devastated that her marriage to Eric is may be over.

Nicole may decide that she should wait to see if Eric can forgive her. She and Eric have faced many challenges to their relationship. However, they have been able to overcome them. They share their love for Nicole’s daughter Holly Walker Jones (Elin Alexander). Eric has a forgiving nature because he was once a priest. He may be able to forgive Nicole.

Nicole and Xander do not have a good past. They were once married but the marriage did not last. Nicole was upset that Eric had not returned back from Africa when she ended up having the one-night stand with Xander. Nicole believes that Xander told Eric about her one-night stand because Sami Brady DiMera (Alison Sweeney) who is Eric’s sister wanted Xander to tell Eric at the party. Sami paid Xander to announce to everyone that Nicole and Xander had the one-night stand. Xander wanted the money but did feel badly that Nicole had been hurt. Xander may want to help Nicole get over losing Eric.

Days Of Our Lives Spoilers – Nicole Walker Gets Payback And Finds Love With E.J. DiMera

Nicole wants to pay Sami back for probably destroying her marriage to Eric. Sami is married to E.J. DiMera (Daniel Feuerriegel). Nicole found out from Philip Kiriakis (Jay Kenneth Johnson) that Sami had been unfaithful to E.J. with Lucas Horton (Bryan Dattilo). Nicole has given a letter to E.J. that his sister Kirsten DiMera (Stacy Haiduk) had written to him about Sami and Lucas. E.J. may end his relationship with Sami. He may want decide to get back at Sami by starting to date Nicole. E.J. knows that Sami does not like Nicole.

Is Kyle Lowder Returning To Days Of Our Lives As Rex Brady? https://t.co/BvjYZFoyii pic.twitter.com/BCQxZ0fpVk

Days of Our Lives Nicole is going to need to pick up the pieces. She will need to figure out who she wants to be with. Nicole could try to wait to see she could win back Eric. Will Nicole try to find a way to convince Eric to give her another chance? Nicole may decide to find comfort with Xander again. Would Nicole turn to Xander in her time of need? Nicole may try to see if E.J. would be interested in dating her because Sami has betrayed them. Will Nicole and E.J. start a relationship to pay back Sami for hurting them both? Be sure to catch up on everything happening with DOOL right now. Come back here often for Days of Our Lives spoilers, news, and updates.